The presence of renowned scholars at a university is an indication of its standing in the world academic community and reflects its reputation for academic excellence. CityU is privileged to have no less than eight world academicians on campus, one of whom is our President, Professor H K Chang. Professor Chang was elected a Foreign Member of the Royal Academy of Engineering () on 10 July. Linkage has put together short biographies of our distinguished colleagues.

Professor H K Chang is a world-renowned expert in the field of biomedical engineering. He joined CityU in 1996, from the , where he was Dean of the . He has published more than 100 scientific articles, is the editor of two research monographs, holds one Canadian government patent, and has given more than 120 academic lectures in many countries and regions throughout the world. Professor Chang is a senior member/member of several professional societies, including the American Physiological Society, the American Thoracic Society, the Biomedical Engineering Society (US) and the American Institute of Chemical Engineers, and is a founding member of the Hong Kong Institution of Science. Professor Chang's honours include Chevalier dans l'Ordre National de la Legion d'Honneur (France) and Founding Fellow of the American Institute of Medical and Biomedical Engineering.

Professor Chung Po-sheun (VP/Research) was elected Fellow of the Royal Academy of Engineering () in 1997, in recognition of his distinguished achievements in electronic engineering. Professor Chung joined CityU in 1990, as Head of the Department of Electronic Engineering. In 1995 he was appointed Dean of the Faculty of Science and Engineering and in 1997 was appointed Vice-President (Research) and Dean of Graduate Studies. Professor Chung's research interests and many publications are in optical communications, integrated and fibre optics, and engineering education. In 1994, his research project on integrated optical circuits was rated excellent by the Research Grants Council (RGC). Professor Chung is a member of many professional bodies and government advisory committees, including the RGC, the Hong Kong Productivity Council, the Hong Kong Safety Institute Ltd, and the Accreditation Board of the Hong Kong Institution of Engineers. He was recently appointed Justice of the Peace by the HKSAR Government in recognition of his contribution to the community.

A Fellow of the Royal Society of Canada, Professor Roderick Wong is Dean of the Faculty of Science and Engineering and Director of the Liu Bie Ju Centre for Mathematical Sciences. Professor Wong joined CityU in early 1994, after nearly 25 years at the . Professor Wong's research interests include asymptotic analysis, integral equations and ordinary differential equations. He has published two books and 83 papers in international journals. He is on the editorial boards of several journals and is the Co-editor-in-Chief of Analysis and Application. His honours include the Killam Research Fellowship (1982-84) from Canada Council, and the Rh Award for Outstanding Contributions to Scholarship and Research (1984) from .

Distinguished University Professor Stephen Smale, who joined CityU's Department of Mathematics in 1995, is a Fields Medallist, a Member of the National Academy of Sciences (1970) and a Member of the of Arts and Sciences (1967). He has made significant contributions to several fields of mathematics, including dynamical systems, geometry, operational research and computational mathematics. The many awards made to Professor Smale throughout his long academic career include the American Mathematical Society's Veblen Prize for Geometry (1965), the Mathematical Association of America's Chauvenet Prize (1988), and the US National Medal of Science (1996), the highest honour for scientists in the .

Professor W Alex Gambling, Chair Professor of Optoelectronics and Director of the Optoelectronics Research Centre, joined CityU's Department of Electronic Engineering in 1996. Professor Gambling has had a long and distinguished career in the fields of optical fibres and optical electronics. His exceptional research contributions to the initiation and development of optical fibre communications have brought him numerous international awards, including the J J Thomson and Faraday Medals of the Institution of Electrical Engineers, the Churchill and Simms Medals of the Society of Engineers, the Rank Prize for Electronics (1991), and the Mountbatten Medal of the National Electronics Council (1993). Professor Gambling is a Fellow of the Royal Society, Fellow of the Royal Academy of Engineering and Foreign Member of the of Sciences.

Professor William Wang, Chair Professor of Language Engineering in the Department of Electronic Engineering and Chair Professor of Linguistics in the Department of Chinese, Translation and Linguistics, joined CityU in 1995. His research interests cover the fields of acoustic phonetics, language engineering, computational linguistics, and language and evolution. Professor Wang has written numerous articles for technical journals and several encyclopaedias, as well as for general science magazines. His many honours resulting from his research on language include a Guggenheim Fellowship, a National Professorship from and resident fellowships from the Centre for Advanced Studies at , and the Center for Advanced Study in the Behavioural Sciences at Stanford. He was elected President of the International Association of Chinese Linguistics when it was founded in 1992. Professor Wang has been an Academician of the Academia Sinica since 1992. His current professional membership includes Chair of the Advisory Committee, Preparatory Office of the , Academia Sinica, , and Member of the Research Grants Council.

Professor Mai Yiu-wing was appointed Chair Professor of Materials Engineering and concurrent Head of the Department of Manufacturing Engineering and Engineering Management in July. Prior to joining CityU, Professor Mai was Pro-Dean of the Faculty of Engineering and Director of the Centre for Advanced Materials Technology and the Centre of Expertise in Damage Mechanics at the . Professor Mai's research interest is in the relationship between the processing, microstructure and property of advanced engineering materials. He is the author of three books, 19 book chapters and more than 300 articles in refereed journals. His awards and honours include the RILEM Award, the Robert L'Hermite Medal and the AFG Achievement Award. Professor Mai was made a Fellow of the of Technological Sciences and Engineering in 1992. He is also a Fellow of the Institution of Engineers of Australia, the Hong Kong Institution of Engineers and the American Society of Mechanical Engineers. 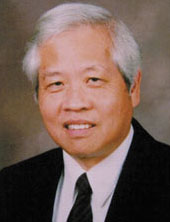 Professor Cheng Chin-chuan joined CityU as Chair Professor and concurrent Head of the Department of Chinese, Translation and Linguistics in April. Prior to joining CityU, he was Jubilee Professor of Linguistics, of Chinese, and of English as an International Language at the at Urbana-Champaign. Professor Cheng had a long career as a linguist at the , where he dedicated himself to teaching and to his work as Director of the Language Learning Laboratory, serving over 200 faculty members and thousands of students. His research interests are in the fields of computer-assisted language learning and lexical semantics.

Professor Cheng's numerous professional activities include Director of the Web-based Chinese Online Reading Assistant Project, a member of the Advisory Committee of the (Preparatory Office), Academia Sinica, , and a member of the Humanities, Social Sciences and Business Studies Panel of the Research Grants Council of Hong Kong. He was elected an Academician of Academia Sinica in 2000.