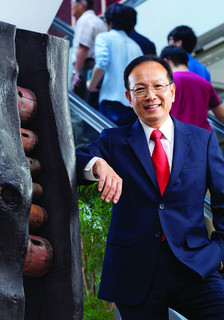 Mr Chan Hon-pun first came into contact with CityU in 2007 when attending a forum hosted by the University.

Mr Chan Hon-pun first came into contact with CityU in 2007 when attending a forum hosted by the University as a member of the Buddha’s Light International Association of Hong Kong (BLIA), and later in 2014 when attending a seminar at CityU about age-friendly communities, representing the Rotary Club of Shatin.

“I can feel the ceaseless efforts CityU has made all these years, and its progress and developments are obvious to all,” he said.

“I converted to Buddhism in 1990 under the inspiration of Venerable Master Hsing Yun,” he recalled. “Then, seeing the great need for well-educated people for the future of society, I decided to do some good by contributing to education, though I knew there wouldn’t be immediate results.”

He chose to help CityU, thinking his donations would have a greater impact on this young university. “Compared with the older institutions, CityU was receiving less help in the form of donations from well-established alumni. That’s why I thought more help was needed from those who could help.”

Since joining the Board of Governors of the CityU Foundation, he has seen how the President, his deputies and the faculty and staff members alike contribute in various ways to the University and the students. For example, in recent years, many students have won prizes and titles in local and international competitions, revealing the great efforts they and their teachers have made, he said.

Mr Chan said he was happy to have witnessed the major advances that CityU has achieved recently, such as the setting up of the CityU Foundation and the School of Veterinary Medicine. He expressed his hopes that CityU would scale even greater heights in terms of research and teaching, the quality of its graduates and our status in the rankings of global universities.

He firmly believes that the CityU Foundation, though still in its infancy, is definitely an important move for the University.

Mr Chan’s life story, as told to CityU Today, is fascinating. Born into an ordinary family in the 1950s, he started working in his early teens, earning money through labour. He has experienced the challenges of poverty.

By a stroke of good fortune, he managed to start his own business and, after many ups and downs, he finally settled down in his undertaking.

After achieving success, Mr Chan began to devote himself heart and soul to charitable work, wishing to give back to society. He has set a worthy example to the younger generation. From his life’s experience, Mr Chan knows well that one’s mentality and attitudes matter far more than the deeds performed, and that the wisdom of “knowing thyself” is far more important than just being smart.

In conclusion, he would like to share with readers of CityU Today his motto: “We are ordinary people doing ordinary deeds. But such deeds done well will make your life extraordinary.”