A screenshot from the awarded short film Let It Go.

A short film produced by a City University of Hong Kong (CityU) student has won the 2016 Best Short Film Award for a College Documentary at the Guangzhou International Documentary Film Festival (GZDOC). Zhou Hongdou, the director, is a master’s student in the Department of Media and Communication at CityU. 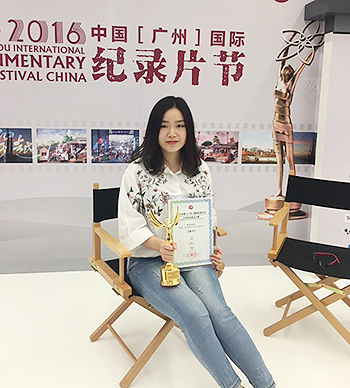 Zhou Hongdou, the director.
The film Let It Go looks into the relationship between the director and her father, who left her when she was six. The jury regarded the short film as a powerful and courageous journey of self-exploration.
Two works by CityU students, Sisters by Yu Ting, and My Father, by Li Junyu, were short-listed, along with 27 others, for the finals. All three CityU finalists were part of a documentary series called Family Album, an MA internship programme led by Ms Li Yuhong, Senior Research Associate in CityU’s Department of Media and Communication.
Family Album documents 100 ordinary Chinese family stories. Now in its 4th year, the project has already produced 70 short films.
Established in 2003, GZDOC is now the only state-level documentary film festival in China. The College Documentary Competition, one of six categories, is a global event for college students. In 2016, this category received 353 entries from 136 universities around the world.
​