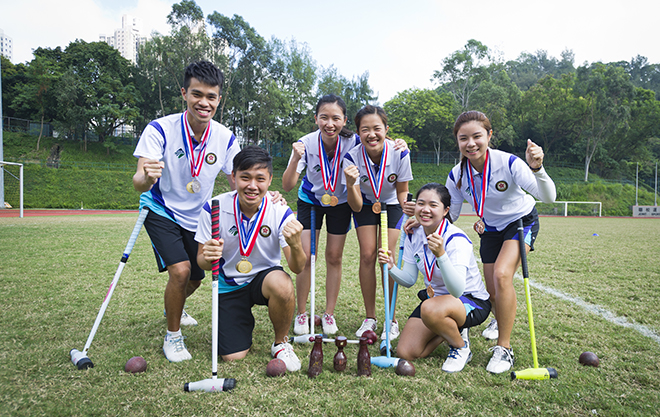 It was the first time for Tong Siu-lun to enter the competition. He won the men’s single (stroke) event by beating his Thai rival with one less stroke. He said he had just wanted to gain some experience in the competition and so he had felt no pressure at all.

“Although I was neck and neck with my opponent in the middle of the competition, I just played as usual to maintain my best performance. I was glad that I could win by one stroke less,” he said. Tong Siu-lun and his teammate Kwok Long-fung also won the 1st runner-up in the men’s double (fairway) and the gold medal in the men’s team (stroke).

Tong Siu-lun said that woodball had helped him meet new friends. “I have played golf for more than 10 years, and while both sports require athletes to overcome challenges individually, woodball has double and team events and so there is a greater demand on team spirit,” he said, thanking CityU for supporting athletes in their sports skills and their academic studies.

Winning three medals like Tong Siu-lun, Chung Chui-ting said woodball had changed her a lot. “I didn’t like to study before. However, after joining the woodball team, I learned to persevere in both academic studies and sports,” she said. After becoming the team captain last year, she also learned to take care of her teammates. She felt that the woodball team has helped her to develop as an individual.

Lam Wing-yee won the women’s single (fairway) event. Although she graduated from CityU last year, she still comes back to the University every week to help train new athletes. She believes that mental state is the key to success in a competition.

“Woodball is a game that you play against yourself. I need to remind myself in a competition that I should concentrate and do my best in order not to make mistakes due to distraction,” she said.

She was delighted at winning the championship, but she dared not slack off as there are upcoming races. She said mental quality was very important for athletes and she was very grateful to support from her coach.

“The coach always encourages me and has confidence in me, which helps me improve quickly,” she said, pointing out that CityU athletes had a very good team spirit. Their constant encouragement and support boosted her woodball skills.

Ms Winnie Wong Wan-sze, the coach of the CityU woodball team, said that the game was an emerging sport in Hong Kong and Asia. This year marked the 11th anniversary of CityU’s woodball team.

She was happy to see athletes winning medals in international competitions, and she was even more delighted to see them grow as people and players. “Playing woodball is very much like dealing with problems in life. Even facing adversity in a competition, athletes should not give up but strike for their very best,” she said. 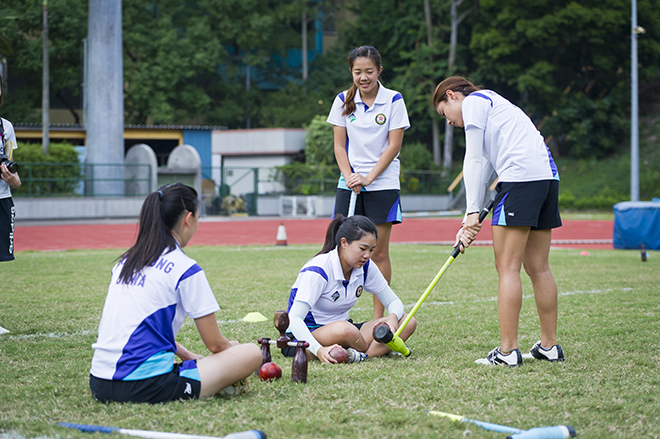