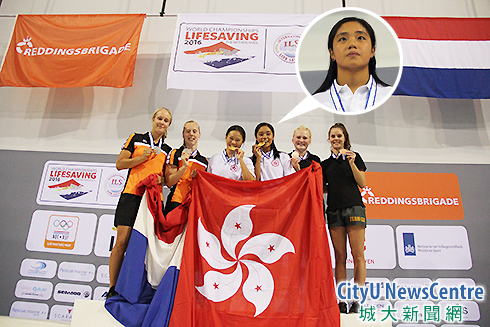 A Year 4 student studying Chinese and History at City University of Hong Kong (CityU) triumphed for Hong Kong at the World Lifesaving Championships (WLC) 2016 in the Netherlands in September.
Ng Chui-wa won the gold medal in the Line Throw event together with her teammate Wong Hock-wing.
Representatives of 16 countries entered the WLC finals out of a total of 26 countries. The Hong Kong team made the fastest attempts in both the heats and the final, overcoming teams from the Netherlands and South Africa.
Chui-wa has been training with the Hong Kong lifesaving team since secondary school year. The sport combines swimming and rescuing skills for the pool and the sea.
The International Life Saving Federation (ILS), which holds the WLC event every other year, comprises national aquatic lifesaving organisations from around the world.