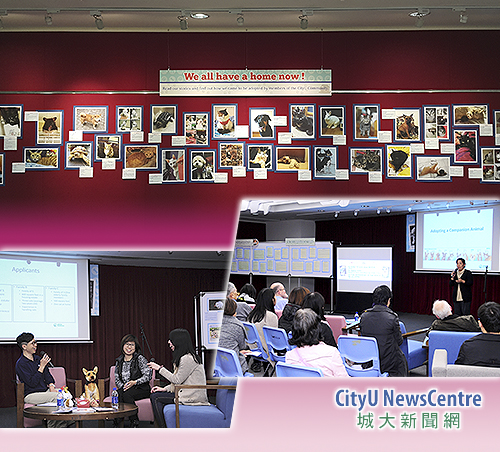 Promoting animal welfare and encouraging the adoption of abandoned animals were issues under discussion at a talk organised by Run Run Shaw Library and the Centre for Animal Welfare in the School of Veterinary Medicine (SVM) at City University of Hong Kong (CityU) on 23 February.

Details on how to adopt a pet and related concerns were discussed by Dr Queeny Yuen Wing-han, Visiting Fellow in SVM, and staff representatives from the Agriculture, Fisheries and Conservation Department as well as the Society for the Prevention of Cruelty to Animals (SPCA).

In addition, SPCA staff used a role play to demonstrate how a pet could be matched with a suitable owner.

The talk was the first in the “Animal Welfare Series 2016” presented by the Library and the Centre for Animal Welfare.

A photo exhibition featuring stories collected from the CityU community and the public about pet adoption will be on view in the Library until 31 March.

Altogether there will be 10 talks in the series with the next one scheduled for 15 March. The title is “An Introduction to Animal Welfare with Particular Reference to Pets”.