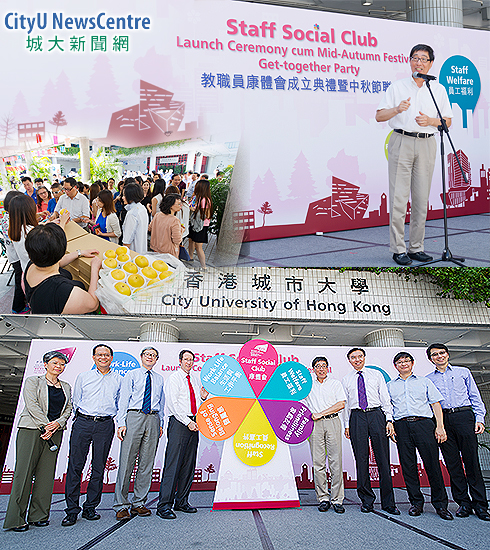 The new Staff Social Club was officially launched during the Mid-Autumn Festival at City University of Hong Kong (CityU) on 25 September.

Colleagues could celebrate the festival not only through the sharing of sumptuous dishes, playing traditional guessing-the-riddle games and joining the lucky draw, they could also find out about the new campus Club.

A rich variety of activities aimed at fostering staff well-being will be organised by the Club, which the University has funded to the tune of $1 million.

The aim is to help strengthen institutional support, promote a healthy and productive campus, and enhance work-life balance, a priority area in CityU’s Strategic Plan 2015–2020.

During the launch, Professor Way Kuo, CityU President, said recently good news stories were arriving one after the other. First, CityU had surged in the QS world university rankings, and second, CityU had received a record-breaking donation that would support the University’s development, he said. The launch of the new Club completed a hat-trick of good news stories.

Special interest classes, health talks, sports activities and outings, as well as different benefits are among the social and recreational activities that the Club has planned for staff members and their families. A new Breastfeeding Room on campus is now available, too.