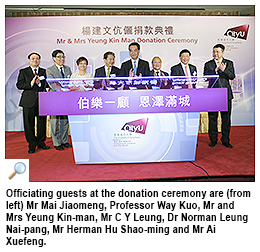 A HK$200-million donation from a local entrepreneur to City University of Hong Kong (CityU) will support our School of Veterinary Medicine (SVM), students’ overseas exchanges, endowed Chair Professorships and other strategic developments.

Starting from scratch, Mr Yeung is the world’s largest manufacturer of glass covers and touchscreens for mobile phones, and sapphire glass covers for famous Swiss watches. His company employs more than 100,000 people in Shenzhen and Huizhou. 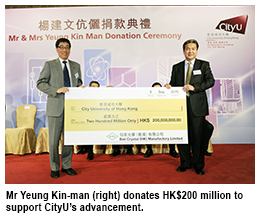 The benefaction is important for two reasons. It is the first time that Mr Yeung has donated to a university in Hong Kong; and it is the largest donation that CityU has ever received.

“I fully agree with CityU’s development concept, particularly on the pursuit of innovation and professional excellence,” Mr Yeung said during the ceremony. He added that he hoped CityU could contribute to society through the innovative professional education provided by SVM; and that his donation would help CityU to foster teaching and research, and support needy students.

Currently 50% of CityU students go on overseas exchanges, fulfilling the target set in CityU’s 2010–2015 Strategic Plan. Mr Yeung’s donation will enable CityU to achieve the new target of 65% of students acquiring overseas learning experience for at least one semester, as stated in the 2015–2020 Strategic Plan. 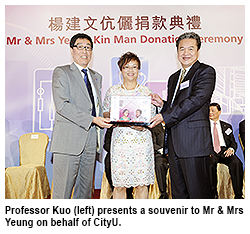 A strategic partnership between CityU’s SVM and Cornell University’s College of Veterinary Medicine has enabled the supervision of around a dozen doctoral students by faculty from both institutions. SVM was established last year after receiving approval from the CityU Senate.

SVM is planning to offer a master’s degree next year.

With support from various sectors, the funds raised by CityU for SVM have surpassed the target. The interest earned from the funds is sufficient to pay SVM’s personnel expenses during the initial stages of development.

Mr Leung praised Mr and Mrs Yeung’s substantial support for local education. “The establishment of the School of Veterinary Medicine not only fills a void for local veterinary education by giving Hong Kong students the opportunity to study locally; it also contributes to public health, animal health as well as food safety in mainland China and the Asia-Pacific region,” Mr Leung said. 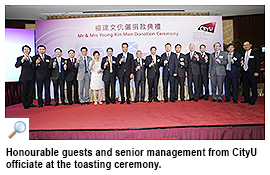 “Today’s ceremony signifies an important milestone in CityU’s development. Mr Yeung’s donation will greatly benefit CityU’s School of Veterinary Medicine as well as all its faculty and students. It also exemplifies the extent to which CityU is recognised by society,” he said.

Professor Kuo extended his heartfelt thanks to Mr Yeung for his donation. With the belief that “Life is knowledge”, Professor Kuo said young people could learn from Mr Yeung as he had acquired extensive knowledge from working in high-tech engineering for many years. His experience and generous donation would benefit students enormously, he added.

In addition, Professor Kuo said Mr Yeung’s innovative discovery spirit was admirable and his experience testified to the traditional virtue of diligence as performed by Hong Kong people.

He also thanked Mr Winfred Chan Hon-pun, Member of the Board of Governors of the City University of Hong Kong Foundation, for his assistance in arranging for Mr and Mrs Yeung’s visits to CityU and this generous donation.

For more event photos, please view at this link.