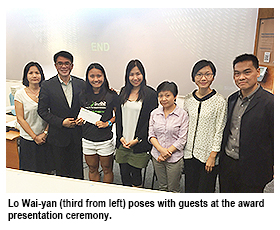 An invitation to participate in a waste audit project at the Hong Kong Rugby Sevens in March gave me the chance to apply classroom knowledge to a real-life event.

The Hong Kong Rugby Football Union (HKRFU) invited me to serve as a Green Ambassador for a waste audit at the Hong Kong Stadium from 27 to 29 March.

For my performance, I was awarded a Certificate of Appreciation jointly issued by the Environment Bureau, the waste management company SUEZ environnement (SUEZ), and City University of Hong Kong (CityU).

The honour to participate came about because I play rugby. Three years ago I received a HKRFU Charitable Trust Fund – Educational Scholarship HKRFU to study at CityU.

Mr Robbie McRobbie, General Manager, Rugby Operations and Commercial of the HKRFU, recommended me to support SUEZ after he heard that I was studying environmental policy. 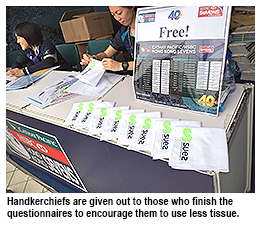 At that time the Environment Bureau was linking up with SUEZ to conduct the first-ever waste audit at the Hong Kong Rugby Sevens. We recruited some CityU students majoring in environmental policy to be Green Ambassadors for the event. Applying skills that I had learned during my studies and during Sevens event, I designed the waste audit survey and conducted the analysis.

The field work introduced various techniques for waste separation and showed us how data on recycled material data were produced. It also gave us a good opportunity to experience the process for a waste audit and see in action what we have learned from books.

The Environment Bureau adopted the data that we collected during the waste audit and waste separation work. The data are used as a reference for formulating a more comprehensive, and appropriate, waste reduction and recycling plan for the future.

It was an honour to have been invited to join this project and perform multiple roles with different parties. I really hope that CityU will inherit the Green Ambassador scheme, especially for students majoring in environmental policy.

The scheme allows us to put our professional knowledge into practice, especially in formulating Hong Kong policy. Also, I believe that these experiences sharpen our competitiveness in future career.​