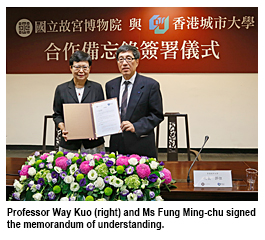 New media art exhibitions from the National Palace Museum (NPM) in Taipei will be exhibited for the first time in Hong Kong following a memorandum of understanding signed between City University of Hong Kong (CityU) and the NPM on 17 October, marking a milestone in cultural and art exchanges between the two places.

CityU is ranked No. 1 in engineering in Hong Kong and Taiwan. With its strengths in technology and engineering, together with its extensive experience in promoting Chinese culture, history and creative media education, CityU will strive to present new media art exhibitions from the NPM to Hong Kong citizens.

Examples of the artworks to be exhibited include the acclaimed “Qianlong C.H.A.O.” and “Rebuilding the Tongan Ships”. These new media art exhibitions are planned to be showcased on the CityU campus and at other local public museums in 2015.

Professor Way Kuo, CityU President and a Member of Academia Sinica, and Ms Fung Ming-chu, Director of NPM, signed the memorandum on behalf of the two organisations. Ms Fung said NPM had chosen CityU as a partner for its first exhibitions in Hong Kong because CityU had a rich experience in promoting Chinese culture and developing new media technology.

“The memorandum signed between the National Palace Museum and City University of Hong Kong has opened another door for cultural exchange between Taiwan and Hong Kong, setting a model for cultural exchange among the four places between the Straits,” she said. “I hope similar collaborations will take place in the future so that Chinese culture can be passed on in new and creative formats.”

Professor Kuo said CityU would make use of its strengths in creative media and technology and engineering to promote cultural exchange between Taiwan and Hong Kong. New ideas for cross-disciplinary integration across the Straits in the humanities and technology could significantly develop the cultural creative industries, he added.

“CityU is committed to quality professional education and research excellence. The ground-breaking partnership with NPM shows that CityU has reached a leading position in Asia or even in the world in new media technology and cultural promotion,” he said.

CityU and the NPM agreed to use various new media technologies in the “Qianlong C.H.A.O.” and “Rebuilding the Tongan Ships” new media art exhibitions to enable visitors not only to see the exhibits but also to participate in the exhibition.

Next year marks the 90th anniversary of the NPM as well as the Italian missionary Giuseppe Castiglione’s arrival in China three centuries ago.

NPM plans to hold a special exhibition and a new media art exhibition to present the works of Castiglione as a painter at the court of the Qing dynasty, and will work with CityU’s School of Creative Media and make use of CityU’s creative ideas and forward-looking technology to develop digital works by Castiglione.

In addition, CityU will organise academic and educational activities such as international academic conferences and forums to help local teachers, students and the general public know more about cultural relics, the creative cultural heritage industry and the digitisation of cultural relics.