Distinguished scholars discuss the development of Chinese culture and the world 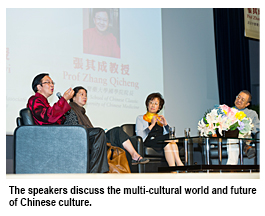 Professor Yuan is a Professor at Peking University's School of International Studies and Director of the Center for American Studies. She pointed out that economic globalisation has spawned a multi-cultural world, but today’s world is often a modern twist on ancient themes, e.g. India rebuilds the Nalanda monastery with modern technology to relive its prime; and Russian President Vladimir Putin recommends a hundred books to seek spiritual nourishment through traditional literature. 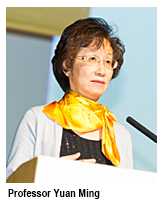 Professor Yuan elaborated on international relations, which is not just about Western versus non-Western views anymore, but rather self-examination and reflection on a variety of cultures. Creativity is the key to the repositioning and combination of traditional beauty and modern beauty to create true beauty. She added that the “Pure Land” exhibition jointly organised by CityU and Dunhuang Academy China two years ago, which used virtual reality to present the ancient Mogao Grottoes in Dunhuang, was the epitome of true beauty.

Renowned writer Professor Wang said that the symbols of Chinese culture in the international community had always been tai chi, calligraphy, Chinese opera, the tea culture and other ancient art forms, while modern Chinese culture since the May Fourth Movement had yet to seek an appropriate way to express itself. Globalisation redefined the world’s boundaries, and China should reposition itself to adapt to this pluralistic world, Professor Wang said. 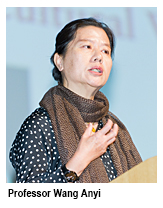 Professor Wang is Vice-Chairman of the Chinese Writers Association and Professor of Chinese literature at Fudan University. She said it was easy for us to ignore other individuals and things in this rapidly developing world, which is why she admires intellectuals and artists who care about the community; however they are often forgotten.

Professor Zhang succinctly explained the principles of the Book of Changes (I Ching). He said that the foundation of Chinese culture was based on the Book of Changes, with Confucianism, Taoism and Buddhism branching out from that. Some say China is facing a spiritual and faith crisis, but according to Professor Zhang, the traditional belief for Chinese people is Heaven and the essence of neutrality in yin and yang, whether in Chinese art or medicine. The Book of Changes also offered wisdom that could bring luck and help people avoid misfortune, he added. 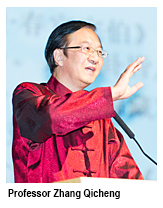 Professor Zhang is the President of the School of National Education of the Beijing University of Chinese Medicine. He said that the national spirit of the Chinese was self-improvement and social commitment, which was reflected in their mindset and their belief in righteousness, harmony, freedom and equality. The Tai Chi Bagua map is the best symbol of the spirit of Chinese culture. He quoted the late Great Master Liang Shuming as saying: “The culture of the world in the future is the revival of Chinese culture.”

The lecture was one of the celebration activities of the 30th anniversary of CityU. The idea of the topic came last summer from Professor Yuan and Professor Way Kuo, President of CityU. They later invited Professor Wang and Professor Zhang to join in. The three scholars each made a presentation, followed by a discussion. The audience was enthusiastic and students were actively asking questions. Everyone agreed that the key to reviving Chinese culture lies in exploring its origin, and accommodating cultures from different ethnic groups to create a pluralistic and wide-ranging culture.