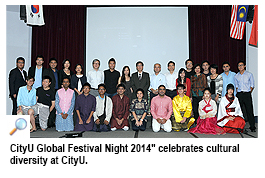 About 300 students spent a highly enjoyable night celebrating cultural diversity with food, a lucky draw as well as singing, dancing and musical performances at the “CityU Global Festival Night 2014” on 8 October.

There is a long tradition at CityU for organising activities that give international students the opportunity to mingle with each other and local students. 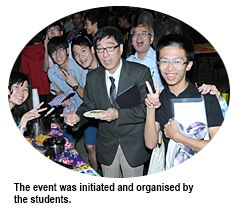 But the CityU Global Festival Night, which was funded by the University Grants Committee, was the first time such a large-scale event was both initiated and organised by the students themselves.

A total of 12 booths were set up in and around the Multiple Function Hall, representing the 12 countries and regions that were represented at the event. 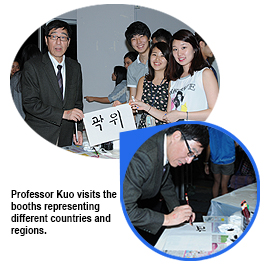 “With the support of the Student Resident Office, we tried to attract as many students as possible to celebrate the international atmosphere at the student residence,” said James Lo Jin-shuen, who was the key coordinator for the event.

James is a Year 3 student in the Department of Information Systems from Taiwan who speaks fluent Cantonese and English. Highly active in hall and international student activities, he is the Residence Tutor for Hall 4 and Internal Vice-President of the CityU International Student Society.