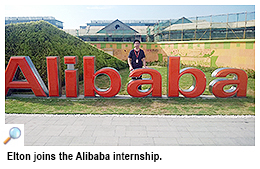 From 14 June to 13 July, I participated in Global Dreamers, an internship programme organised by Alibaba Group (Alibaba). This internship not only widened my horizons but also inspired me to find more courage and determination to pursue my dream.
A total of 240 candidates were shortlisted for this programme. After the interview and the written examination, only 27 students were selected, including me and 5 other CityU students from the College of Business. We then went to Taobao City in Xixi Park, Hangzhou, and began our internship there as planned.
After some classroom lectures and practice, we became familiar with Alibaba’s mission and culture, taking the first courageous step to pursue our dreams and making a commitment to contribute to society in the future.
Alibaba always encourages its staff to initiate and participate in charity activities. During the internship period, my teammates and I happened to know that river pollution near Hangzhou had become increasingly serious. The local government had launched a Five Water Treatment project, calling for the combined efforts of individuals, enterprises and government departments to reduce pollution in local rivers. 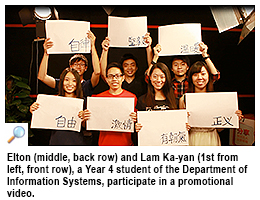 In response, the Green Zhejiang environmental advocacy group held the Creative Competition of Enhancing Water Quality of Rivers in Hangzhou, inviting improvement suggestions for solving river pollution. We decided to participate in the competition.
Over the past month, we made use of the Internet to collect information in the daytime and went to the banks of the heavily-polluted Gaojiao River to conduct on-site observations after work. We realised that the government's previous measures against environmental pollution were based on urban design only, which proved to be limited in scope. Our philosophy was from the user’s perspective with two focuses — offering facilities along the riverbanks for public enjoyment and providing a more comfortable living environment for local residents. Our efforts were finally rewarded when we won the third prize in the Think Green category of the competition.
In order to prepare a good proposal, we continued our research after work every night during that month. Though suffering from growing fatigue, we still worked hard since we all had a deep empathy for the residents living along the river and passers-by. We hoped that one day they wouldn’t have to put up with the polluted water and the foul odours. We learned from our participation that despite all the possible challenges and setbacks in the pursuit of our dreams, we must persist and focus on the goal. Whatever the outcome, we would still have happy memories.
During the internship period, we also had exposure in the Cloud Computing and Big Data departments and its partner logistics company, Cainiao Network, which are considered the secret weapons of Alibaba. We drafted proposals for the Taobao Customer Service Centre and AliExpress and took part in the running of Orange Sky, a TV business unit run by a department in charge of promoting Alibaba culture — I even made a guest appearance in a promotion video. Over the four-week internship period, we often worked late into the night. All these experiences allowed us to gain a better understanding of the daily operations of the company and appreciate its free and open atmosphere, its culture of continuous learning and embracing change, its passion and dreams. Its staff's hard work and enthusiasm impressed me deeply, inspiring me to reinvent myself, to be more self-reliant and active. 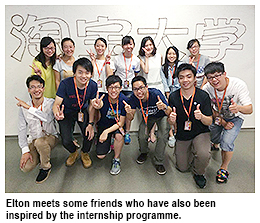 Winning the chance to participate in Alibaba’s Global Dreamers programme, I must thank CityU, which provides the Gateway Education courses. They gave me opportunities to understand how Alibaba operates, acquire knowledge of its product patents and learn about opening an online store. Equipped with the experience accumulated on the courses, I can put what I've learned into practice.
An eye-opening experience, a great platform for me to begin my journey to pursue my dreams and even start my own business in the future — that was my internship experience at Alibaba. I hope my study and hard work can help me realise my dreams, just as I believe a single spark of light today would grow and illuminate the whole world.