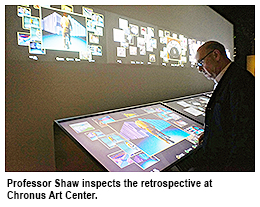 The five-day symposium in Montreal in May was drawing to a close when, unbeknownst to one of the four keynote speakers, Professor Jeffrey Shaw of City University of Hong Kong (CityU), plans were underway for a special celebration.

In recognition of his outstanding contributions to immersive and interactive technologies, the Society of Art and Technology (SAT) in Canada presented Professor Shaw, Dean of the School of Creative Media (SCM), with a lifetime achievement award.

But it isn’t just in Canada where Professor Shaw’s peers in the international creative media community are galvanising interest in his catalogue of work. In fact, a major retrospective is currently underway at Shanghai’s Chronus Art Center (CAC), said to be the first major non-profit art organisation in China to focus on the experiment, production, research, exhibition and education of new media art.

The retrospective, in addition to being a chance to evaluate and reflect upon Professor Shaw’s pioneering career, has a fascinating additional aspect.

“My contribution is part of what the event’s curators are calling a ‘twofold solo exhibition’,” said Professor Shaw, whose first documented media artworks appeared in the late 1960s.

What this means is, Professor Shaw’s art is made accessible via a series of multi-touch tables side-by-side with the work of one of China’s leading new media artists, Professor Hu Jieming of the Shanghai Institute of Visual Art.

“So two archives are conjoined,” said Professor Shaw. “Visitors can compare our respective work using keywords such as time, place and genre, thus giving insight into the pioneering histories of media art in the East and West, discovering their affinities and differences.”

For instance, in terms of history, new media art in China only really took off in the 1980s, whereas in the West, the roots date back to the 1950s.

The aim is to later publish both archives online for a wider, global audience to evaluate and discuss.

However, by its very nature, new media art is never static, and while the lifetime achievement award and the retrospective reveal a fascinating body of work, there is much more to come in Professor Shaw’s career.

He was recently made a visiting professor at Imperial College London Institute for Global Health Innovation (IGHI) partly as a result of a major conference about omics and big data held last year at CityU. 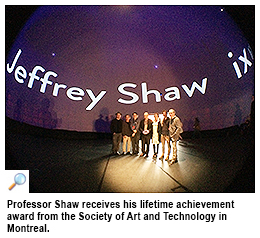 Among the experts attending the International Symposium on Translating Omics Science to Clinical Applications (TOSCA 2013) on the CityU campus last August was Professor Jeremy Nicholson, head of IGHI, who, after touring CityU’s facilities, found himself deeply impressed by the visualisation capabilities of SCM’s immersive technologies such as Gallery 360 at the Run Run Shaw Creative Media Centre.

There were also potential benefits for therapy since scientists believe patients are more likely to respond positively to treatment if they are better informed and more knowledgeable about the procedures they have been assigned. SCM’s visualisation technologies will help present to patients aspects of their treatments in a manifest comprehensible manner.

“So my visiting professorship at Imperial is very much a fortuitous outcome of TOSCA 2013,” said Professor Shaw.

Meanwhile, two other recent awards reflect the high regard that Professor Shaw enjoys among his peers, and hold promise for future collaborations in the field. He was recently made Honorary Professor at the Central Academy of Fine Arts (CAFA), Beijing, perhaps the most illustrious art school in China. CAFA, with which CityU already has successful student exchange arrangements, is currently building up its portfolio of creative media courses, and Professor Shaw will play a role consulting on these programmes.

The second award is an honorary doctorate from the Multimedia University (MMU) in Malaysia, the highest honour conferred by MMU to individuals in recognition of proven exceptional leadership, excellence and contributions in their respective profession or field of work.

The MMU honour deepens CityU’s linkages with Southeast Asia, and could inspire to future collaborative projects.