More than 60% of students aged 12 to 23 from ethnic minority groups in Hong Kong evaluated that their Chinese proficiency is only comparable to that of average local primary students, according to a survey conducted by City University of Hong Kong (CityU) and Hong Kong Christian Service (HKCS). 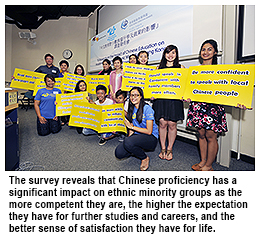 In the questionnaire survey conducted by the City-Youth Empowerment Project (CYEP) from CityU’s Department of Applied Social Sciences and HKCS, 378 students aged 12 to 23 and 107 job seekers and workers aged 16 to 50 were interviewed between March and July this year. They were asked questions about their experience and perceptions on how Chinese language education affects their opportunities for further studies and career development.

Dr Anna Hui Na-na, Associate Professor of CityU’s Department of Applied Social Sciences and CYEP advisor, said, “It shows that students from ethnic minority groups in Hong Kong have problems in improving their Chinese proficiency when they start their secondary education.”

The three major problems faced by job seekers and workers from ethnic minority groups are:  unable to read or write Chinese (66%), unable to understand recruitment advertisements in Chinese (50%), and a lack of suitable positions for them to apply for (46%). Nearly 70% of them indicated that there are no resources for them to continue to study Chinese while working. For example, the organisations that they work for do not offer Chinese language courses, their employers do not provide support to them for improving their Chinese, and they could not study Chinese language courses offered by the government or education institutions.

The survey also found that the important factors for improving Chinese proficiency are: the language environment and support of families and peers, assistance of schools and community organisations, and a willingness to participate in community activities. Therefore, ethnic minority groups can achieve higher Chinese competency by taking part in more community activities to learn about the local culture, knowing how to get help from the community, and becoming more aware of public affairs and social issues.

Dr Hui added that Chinese proficiency has a significant impact on them as the more competent they are, the higher the expectation they have for further studies and careers, and the better sense of satisfaction they have for life.

Ms Karrie Chan Chung-ho, Chief Supervisor of Ethnic Minority Services at HKCS, said, “Although the Education Bureau has introduced some measures to help students from ethnic minority groups in recent years, the survey shows that these measures have failed to help them to improve their Chinese competence.” 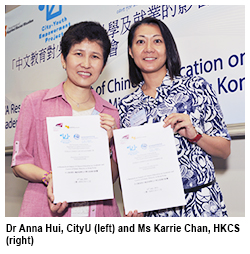 She hopes that the “Chinese Language Curriculum Second Language Learning Framework” (Learning Framework) to be launched by the Education Bureau in 2014/15 could help students from ethnic minority groups to enhance their Chinese proficiency, enable them to achieve their goal of further studies and career development, help them integrate into the local community and take part in social affairs with equal opportunities.

The number of full-time students aged below 15 among ethnic minority groups in Hong Kong has risen from 23,444 in 2006 to 32,400 in 2011, a jump of 40%. However, the percentage of these students studying in higher education is far lower than that of Chinese-speaking students, even though the number of places in tertiary institutions has significantly increased. In 2011, the articulation rate for students from ethnic minority groups in the age groups of 17 to 18 and 19 to 24 was lower than that of the same age groups of Chinese students by 10% and 12% respectively. A major reason is the difficulty they face in learning Chinese.

Based on the survey results, CityU and HKCS would like to make the following recommendations to help ethnic minority groups improve their Chinese proficiency and increase their opportunities of articulation and career development.

●       Enhance the transparency of the Learning Framework to help students and parents from ethnic minority groups understand and express their comments on it;

●       Enhance support to parents and their understanding of relevant information, resources and skills on assisting their children in their further studies; set up a one-stop education consultation platform in the Regional Education Offices in different districts under the Education Bureau to provide information seminars, enquiry hotlines and consultation services to parents from ethnic minority groups;

●       Provide more opportunities for students from ethnic minority groups to take part in community activities such as cultural exchanges, mentorship programmes and voluntary services in order to create a language environment suitable for learning Chinese.

●       Arrange seminars for employers to enhance their understanding of the situation of ethnic minority groups; assist employers to set reasonable Chinese competence requirements against different types of jobs and strategies on adjusting the job requirements and assignments;

●       Offer Chinese language courses with uniform teaching and learning objectives, pathways, materials and assessments that can be linked to different levels of the Qualifications Framework, which is a seven-level hierarchy of qualifications covering the academic, vocational and continuing education sectors, in order to help ethnic minority groups improve their Chinese proficiency step by step and acquire relevant qualifications that allow them to apply for suitable job positions.