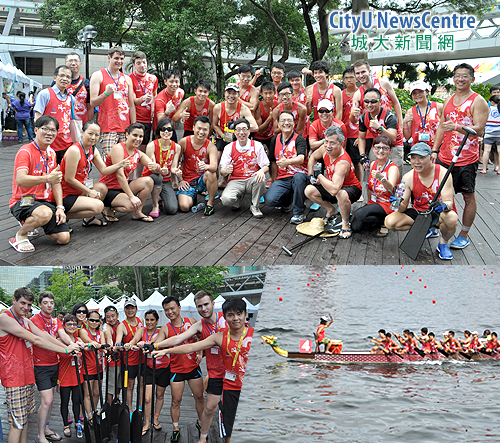 A “dragon” formed by over 30 students and staff members from City University of Hong Kong (CityU) participated in the Hong Kong International Dragon Boat Races at Victoria Harbour on 7 June. This was the third consecutive year that CityU had competed in the races.
The members of the CityU team were from various departments and units. Some were from the UK, Russia, Sweden and Tunisia, demonstrating the internationalisation and diversification of the University. The team took part in the Universities Invitational Race.
Professor Way Kuo, University President, was on hand to help boost the energy and motivation levels of the CityU team. After over two months’ training, the team was highly motivated to take on the challenge.