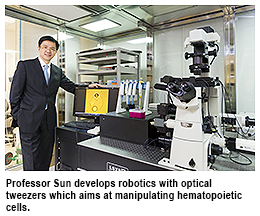 A research project on the manipulation of hematopoietic cells developed by Professor Sun Dong, Chair Professor and Acting Head of the Department of Mechanical and Biomedical Engineering at City University of Hong Kong (CityU), to improve the treatment of blood diseases such as acute myeloid leukemia (AML) has received funding of around HK$6 million from the Research Grant Council.
The cross-disciplinary research team led by Professor Sun has been collaborating with the University of Hong Kong to develop an innovative cell manipulation and testing system by integrating technologies of robotics, optical tweezers and microfluidics. The system can be used to probe the functional mechanism of hematopoietic cells, which can foster the development of treatment for blood diseases.
As cells are the basic functional units of living organisms, we may have a better understanding of some diseases if we know more about individual cell mechanism. However, existing technologies allow scientists only to study tissue composed of a group of cells. To rectify this situation, Professor Sun and his research team developed an innovative cell testing system by combining the technologies of robotics, optical tweezers and microfluidics. The system can be used to manipulate cells in various operations, including cell stretching, cell adhesion and cell motion control. Scientists can then perform experiments on single or a group of cells simultaneously to have a deeper understanding of individual cell mechanism.
Professor Sun pointed out that cell manipulation required high precision, accuracy and consistency, which is difficult to achieve by manual operation. Optical tweezers are an emerging technology, utilising a highly focused low-power laser beam to manipulate objects with micro/nanometer size. Thus, the operation system integrated with the technologies of robotic automatic control and optical tweezers can ensure a consistent and accurate cell testing procedure and significantly reduce variance in the experiment results. Consequently, scientists are able to obtain consistent results from repeated tests on either single or a group of cells. 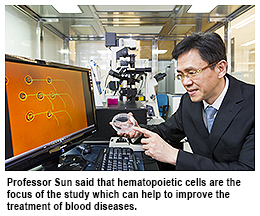 Professor Sun indicated that hematopoietic cells were the focus of the study. Due to the cells’ significance on the functions of a human body, their abnormal performance can lead to lethal blood diseases that may afflict on one in every 250 persons. The deadliness of such diseases can be seen from the fact that only 30% of AML patients can be cured by conventional chemotherapy and allogeneic bone marrow transplantation.
Professor Sun stated that there were three objectives for his innovative research: “First, developing a testing technology for cell abnormality to find out the relationship between mechanobiological properties of hematopoietic cells and functions of cells in order to understand the mechanism of abnormal differentiation of cells; secondly, probing the mechanism regulating the interactions between hematopoietic and stromal cells from the perspective of single cells through cell adhesion manipulation; thirdly, studying the cell motion mechanism and testing cell transportation to understand the patterns of hematopoietic cells entering and exiting bone marrow,” he said.
Professor Sun stressed that the research project could help scientists and medical professionals better understand the mechanism of hematopoietic cells. It can also provide reliable data for further studies on other related tissue that may lead to treatment for relevant diseases.