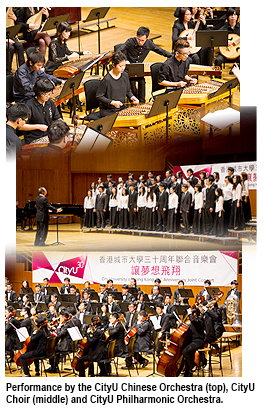 More than 1,100 students, staff, alumni, donors and friends of City University of Hong Kong (CityU) enjoyed sweet melodies in the “Embrace Our Dreams” joint concert at Hong Kong City Hall on 6 April in celebration of the University’s 30th anniversary. 140320-1_opening_L.jpg
Performing well-known pieces of music and songs at the more than two-hour concert were more than 200 students and alumni from the CityU Philharmonic Orchestra, CityU Chinese Orchestra and CityU Choir. Their joint performance of the theme song “Embrace Our Dreams”, the last item on the programme, ensured the audience reveled in the music.
“Embrace Our Dreams” was written by renowned composer Dr Mui Kwong-chiu specifically for the concert. The lyrics of the song “Those happy days, won’t be gone and far away, while you’re young and you’re strong, let your dreams run high!” encouraged students to persevere and not to give up their dreams.

Dr Norman Leung Nai-pang, CityU Pro-Chancellor and Chairman of the 30th Anniversary Organising Committee, praised the students for their commitment to the Choir, Philharmonic Orchestra and Chinese Orchestra even though there is no performing arts curriculum at CityU. He said he was glad to see students working hard to organise a diverse range of concerts, some of which have won acclaim within the local music community.
Mr Herman Hu Shao-ming, Chairman of CityU Council, said the concert was the result of months of collaboration and rigorous practice on the part of the CityU students, which exemplified their hopes, dreams and passion. While students embrace their dreams, CityU also has its dream to become a leading university excelling in research and professional education, he said.

As the first performer on the programme, the CityU Chinese Orchestra played theme songs from classic TV programmes from the past few decades. The familiar tune of the songs livened up the mood of the audience who responded well to the performance.
The passionate performance of the three songs “Ode to Four Celebrated Festivals”, “Your Dream” and “Zhu Fu” by the CityU Choir touched the hearts of the audience. “The Rite of Spring” performed by the CityU Philharmonic Orchestra described the celebration of the Spring Festival by primitive Russian tribes.
Sessions were arranged during the course of the concert for alumni to share their long relationship with the student performing groups and talk about how they have pursued their dreams. 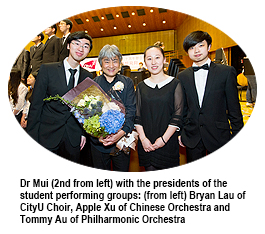 he concert reached its climax with the theme song “Embrace Our Dreams” jointly performed by the CityU Chinese Orchestra, CityU Philharmonic Orchestra and CityU Choir. This dedicated rendition earned thundering applause from the audience and brought the concert to a perfect climax.
The presidents of the three student performing groups said they were excited about the opportunity to celebrate the University’s 30th anniversary. Due to the large number of performers involved, they could only practice and rehearse together a few times, but since this was a rare and memorable occasion, everyone worked hard and with a great deal of passion, they said.