A graduate from the School of Creative Media (SCM) at City University of Hong Kong (CityU) has won the New Face Award in the Art Division at the 17th Japan Media Arts Festival for his interactive installation artwork. 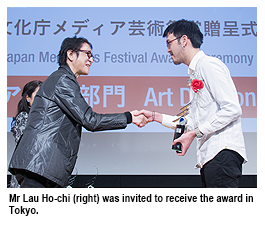 The success of Mr Lau Ho-chi at this renowned international media arts event, now in its 17th year and with a record 4,347 entries from 84 countries and regions around the world, exemplifies CityU’s focus on advancing theoretical and practical training in creative media teaching, encouraging students to generate ideas, and nurturing the next generation of professionals for the creative media industry.

After completing his Associate Degree in Media and Technology in 2011, Mr Lau articulated to the BA (Hons) in Creative Media and graduated in 2013 before joining the SCM as a Research Assistant specialising in computer games and media art.

His award-winning art installation in the festival, titled “Learn to be a Machine | DistantObject#1”, was an interactive video artwork for his final-year project. It features a representation of the artist himself and provides a means for the audience to interact with the system. By scrolling a trackball, the audience can manipulate the direction of the artist’s “eyes”. Blinking and facial expressions are generated randomly.

The jury members commended his installation for skilfully manipulating the computer to interact with the audience and encouraging viewers to re-think the true meaning and value of “interactive” and “real-time” in the multi-media artwork. 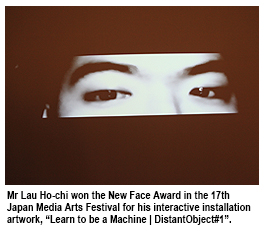 The idea for the artwork originated from bedsit apartments in Hong Kong, Mr Lau explained. “A couple of years ago, I was stunned to see underprivileged lodgers living in the Shamshuipo District. I began to reflect on the balance of power in the world, how ordinary people tend to follow orders given by the powerful; while in the world of art, the audience appreciates artwork under the control of the artists. But I wanted to see the opposite. Through this interactive work, the audience can manipulate the artist by switching roles.”

Mr Lau thanked Dr Olli Tapio Leino, Assistant Professor in the SCM, for his guidance and support. “This work took me half a year with almost 90% of the time pondering how to transform this abstract idea into a physical installation artwork. I am grateful to Dr Leino for his patience and his discussions with me, which brought me into a whole new world,” he said.

The teaching in SCM broadened his vision, he added. “SCM encourages students to pursue what they are interested in and explore the various fields of creative media, giving us adequate fundings and resources. We are free to develop our creativity and interests without worrying about the facilities and equipment.”

Since its establishment in 1997, the Japan Media Arts Festival has become a comprehensive festival of media arts, honouring outstanding work from a diverse range of media. The festival hands out awards in each of its four divisions: Art, Entertainment, Animation, and Manga, and provides a platform for the appreciation of award-winning and other notable works.

As the organiser of the festival, Japan’s Agency for Cultural Affairs has promoted media arts abroad for several years, and the Japan Media Arts Festival has developed into an annual international festival.