Three top scholars from City University of Hong Kong (CityU) were conferred 2013 CityU Research Excellence Awards for their contributions to the local and international scholarly arenas.
Professor Xue Quan, Chair Professor of Microwave Engineering in the Department of Electronic Engineering, and Professor Leung Kwok-wa of the same department received Excellent Awards, while Professor Yang Zhilin of the Department of Marketing earned a Certificate of Merit. 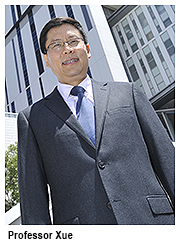 Professor Xue has researched microwave circuits and antennas for many years, and most of his more than 300 journal papers were published in top-tier journals in the field. In 2012, he published 35 journal and conference papers and received more than 600 citations by others. In addition, he has five licensed patents and his outstanding achievements in advancing millimeter wave technologies and applications have gained world-wide recognition.
In addition he facilitated with his colleagues the establishment of the State Key Laboratory of Millimeter Waves (SKLMW) at CityU and has contributed to the dramatic growth in the number of co-operations that CityU enjoys with mainland research institutions.
Professor Xue said the award was recognition of his efforts and perseverance over the past 13 years. “This is not an award for any special contributions, but for the results accumulated over the years. Special thanks to the University, the College of Science and Engineering, the Department of Electronic Engineering and all my colleagues in the labs and research centres, especially Professor Luk Kwai-man and Professor Chan Chi-hou. Without their help and support, I would not have won this award,” he said.
Professor Xue is also Associate Vice-President (Innovation Advancement and China Office) of CityU, the Director of the Information and Communication Technology Centre, the Director of the Applied Electromagnetics Laboratory, and Deputy Director of SKLMW. 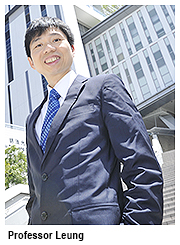 Professor Leung is a leading scholar in antenna theory and an active researcher in the application of dielectric materials. His latest research includes using glass to receive and emit radio-frequency signals, leading to the innovative idea of integrating antennas with decorative glass and lighting systems.
As the Principal Investigator, he has received 15 General Research Fund/Competitive Earmarked Research grants, one National Natural Science Foundation of China funding, and 10 CityU Strategic Research grants, with a total of over HK$11 million.
Professor Leung has published two research books, four book chapters, 139 international journal papers, and 71 international conference papers. He also has one China patent granted, and two China patents and five US patents filed.
“I am very grateful to receive the award. I would like to thank Professor Luk Kwai-man for encouraging me to compete for it,” he said, adding that he appreciated CityU’s state-of-the-art research facilities, the high-level research conducted by his colleagues, and their support and encouragement.
Professor Leung is the first Editor-in-Chief appointed from Asia for the IEEE Transactions on Antennas and Propagation, the most prestigious international journal in the field of antennas and propagation. It was first published in 1952. 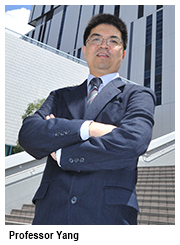 Professor Yang is well-known internationally for his research in establishing an institutional-based, legitimacy-embedded efficiency model for business marketing as well as developing a reliable instrument for measuring online service quality.
“This is a great honour for me and my profession. The award has encouraged me to continue my ongoing research in the marketing discipline,” he said.
Since joining CityU in 2001, Professor Yang has published 61 articles in premier business journals including the Journal of Marketing and the Journal of Marketing Research. His publications have earned more than 3,000 citations according to Google Scholar.