​
The outstanding performance at an international programming competition by Mr Bert Leung Wing-pan, a computer science graduate of City University of Hong Kong (CityU), has earned him a position as a software engineer at the world’s IT giant, Google Inc. 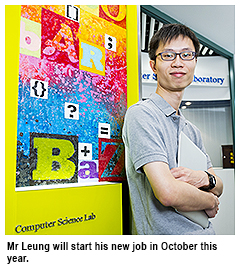 Although Mr Leung did not win the Google Code Jam, a programming competition highly regarded by the computer world, he was one of the best performing contestants from Hong Kong.
Then, in April 2012, a few months after the competition, Mr Leung received an email from Google inviting him to a job interview. After a long-distance phone interview, he went to the US a month later for a face-to-face interview. He nailed the interview and will start his new job in October this year.
On the day of the interview at Google’s headquarters at Mountain View, California, Mr Leung attended four interviews, which tested his knowledge about computer programming and technical skills. He was even given an IQ test.
“There were technical and academic questions such as those on hard core system and algorithm, which were far beyond the scope of general knowledge on programming for webpages and mobile apps,” Mr Leung said.
Mr Leung has been offered an annual salary of about US$100,000, some Google shares and a removal subsidy of US$3,000. Regarding his new work environment, he said that the atmosphere was rather relaxing. “There are table tennis tables and snack bars in the office. Free buffet with a variety of food is also available at the staff canteen,” he added. 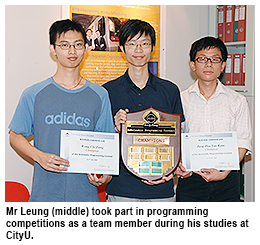 After completing his bachelor’s and master’s degree in computer science at CityU in 2009, Mr Leung has worked for a local technology company as a software engineer conducting research and developing applications.
He wished to thank the faculty members at CityU’s Department of Computer Science for their teaching and advice. “Dr Duncan Wong Shek was one of the coaches who taught us to improve skills to tackle problems when we represented the University to join external programming competitions,” he said.
Mr Leung became fascinated with computer programming when he was a secondary school student. He would sometimes sacrifice his sleep to solve difficult problems in a competition. It finally turned out to be his career and opened up a prestigious opportunity for him in the US.
“Talent and interest alone are not good enough for success in the technology sector. Working hard is also very important, and you can never practice enough when it comes to programming,” he said.