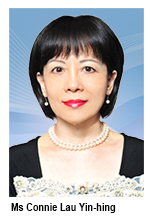 Two community leaders have been appointed by the Chief Executive of Hong Kong SAR to the Council of City University of Hong Kong (CityU) with effect from 15 April 2013 to 31 December 2015.
Ms Connie Lau Yin-hing is currently the Chairperson of the International Advisory Group of Experts on Consumer Protection within the United Nations Conference on Trade and Development (UNCTAD). As the former Chief Executive of the Hong Kong Consumer Council, she has a wealth of experience and expertise in consumer protection. She was appointed a Justice of the Peace in 2011. 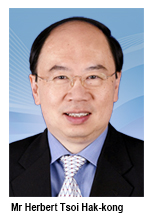 Mr Herbert Tsoi Hak-kong is a partner in the legal firm Herbert Tsoi & Partners. He served as the President of The Law Society of Hong Kong between 2000 and 2002, and was awarded the Bronze Bauhinia Star in 2006 by the Government for his meritorious public and community service, in particular for his contributions to promoting the development of the legal profession. He was appointed a Justice of the Peace in 2001.
Two other new members were appointed earlier this year. They were Mr Andrew Fan Ka-fai, President of Greater China Region, Nu Skin Enterprises, Inc., and Ms Dilys Chau Suet-fung, a certified public accountant and a partner at Ernst & Young.