​
A novel membraneless photocatalytic fuel cell recently developed by City University of Hong Kong (CityU) offers dual benefits: using wastewater to generate power and at the same time purifies the wastewater. By operating without a membrane, the cell reduces production costs by 50%, making it more feasible to turn fuel cells into commercial applications. 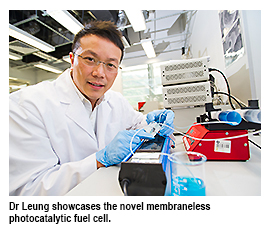 Commonly used batteries have only a short working life and contain poisonous heavy metals like arsenic, cadmium, lead and mercury. If they are not properly treated after disposal, the poisonous materials may leak into the soil and cause environmental pollution.
However, fuel cells have a longer working life and use less heavy metal. They use different types of fuels like hydrogen, methane and alcohol to generate electric power. When they run out of fuel, simply refilling them will resume their function. Better still, they do not produce carbon emissions throughout the process of production, power generation through to disposal. They can be widely used in mobile phones, household appliances, automobiles and power generators for homes and factories.
Fuel cells are currently not very popular, mainly because of the high cost. Dr Michael Leung Kwok-hi, Associate Professor and Associate Dean of the School of Energy and Environment, and his research team have worked hard to boost the competitiveness of fuel cells. They have successfully developed a novel fuel cell that requires not only a much lower production cost but also purifies wastewater during the operation.
“The proton exchange membrane fuel cell can function in lower temperatures, starts faster, has a simpler architecture, and is easier to operate than other types of fuel cells. However, it requires the use of a costly special membrane. So we have used microfluidics technology to successfully develop a new membraneless fuel cell that can reduce production costs by as much as 50%,” said Dr Leung, who is also the Director of CityU’s Ability R&D Energy Research Centre. 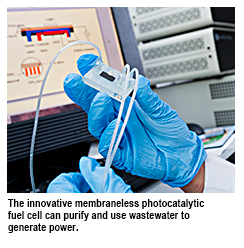 Microfluidics technology is based on microelectronic, micromechanical, bioengineering and nano technologies. It can be used to control fluids in micro volume (e.g. microlitre or nanolitre) to perform specific operations.
Dr Leung’s team has further added a nano photocatalytic coating to the membraneless fuel cell, making it possible to start a photoelectric chemical process when it is placed under sunlight. This has enabled the fuel cell not only to use wastewater that contains organic compounds as fuel to generate power, but also to simultaneously purify the wastewater.
“The photocatalytic coating will trigger a photoactive reaction under sunlight to produce strong oxides that can decompose organic pollutants in water. We have identified a safe and effective photocatalyst after testing and modifying many photocatalysts of different nanostructures. Our new photocatalyst can be used to perform wastewater treatment, with an effective rate of 99% for the elimination of organic pollutants,” Dr Leung said.
The fuel cell with photocatalytic function can be used by factories, residences and public sewage plants. Dr Leung is currently applying for a patent for this new fuel cell.