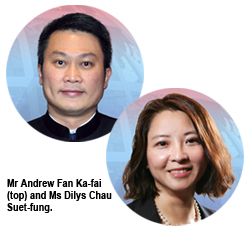 Two outstanding members of the business and professional communities have been appointed by the Chief Executive of the HKSAR to serve as members of the Council of City University of Hong Kong (CityU) for a term of three years starting from 1 January 2013 until 31 December 2015. They are: Mr Andrew Fan Ka-fai, President of Greater China Region, Nu Skin Enterprises, Inc. and Ms Dilys Chau Suet-fung, Certified Public Accountant and a partner at Ernst & Young. Both Mr Fan and Ms Chau are recipients of CityU Distinguished Alumni Awards.

In addition, Ms Shirley Chan Suk-ling, and Mr Joseph Pang Yuk-wing have been reappointed as members of the Council for another term of three years.
Timothy Lee Ho-yin, the newly elected Students’ Union President, will serve on the Council for a year from 1 January 2013. And Chau Sze-tat, the elected postgraduate student member, will serve for a term of one year, with effect from 15 November 2012. Two incumbent members, Dr Fung Wai-wah and Mr Mak Hoi-wah were re-elected by staff to the Council.​