Four graduates of the School of Creative Media (SCM) at City University of Hong Kong (CityU) have won six awards at film competitions held in Hong Kong and Taiwan for their outstanding works. 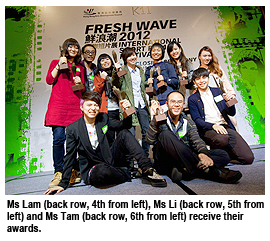 Mr Lo Chun-yip received the Contemporary Viewpoint Award and the Caring for Human Rights Award in the 2012 South Taiwan Film Festival for his documentary Days After n Coming. Ms Li Sum-yuet was honoured with the grand prize Fresh Wave Award and the Best Film Award (Open Division) in the Fresh Wave 2012 - International Short Film Festival for her work Flowers with Aphasia. Along with Ms Li, Ms Isabella Lam Candice and Ms Tam Wai-ching, graduates of 2011 and 2012 respectively, received the Best Creativity Award (Open Division) and the Best Creativity Award (Student Division) respectively at the same festival.
The Days After n Coming chronicles a series of social events from 2010 to 2012 in Hong Kong, including the New Year march, Choi Yuen Village anti-eviction struggle, and the occupation protest at Central District. The first half of the film shows many violent and confrontational scenes, while the second half focuses on social activists discussing government policies and their goals. 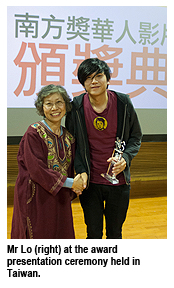 “I took part in these social events through my camera, which not only recorded street campaigns in Hong Kong but also my growth. I hope that the public will be able to see scenes not shown by the mainstream media through my film and know they can get information from other channels,” said Mr Lo, a 2011 SCM graduate, adding that the awards were an encouragement to him and he would continue to produce independent films.
Currently studying for a Master’s degree in Cultural Studies, Mr Lo is making a new documentary that depicts a dishwasher over the age of 60. “In this film, I wish to ask who are the people in need of social security. Also, is it fair for those who have only work but no other meaning in their lives in this highly affluent city?”
He was grateful to CityU’s teachers for encouraging him to re-edit his documentary and take part in the competition. He was also glad to have the chance to see many films with different themes and styles at CityU, which has given him a more comprehensive vision.
The South Taiwan Film Festival organised by the South Taiwan Film Association aims to establish an exchange platform for Asian films and to encourage productions by independent Chinese film producers and new directors. The Contemporary Viewpoint Award honours films about contemporary social issues in the face of social, political and economic change with insightful perspectives through images. The Caring for Human Rights Award is for a drama or documentary that promotes human rights education based on real events. 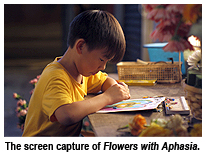 Flowers with Aphasia by Ms Li, a 2012 SCM graduate, depicts a man who works at a floral shop next to a funeral parlour. The film shows how he did not have a good relationship with his son and found it difficult to communicate with his wife after their son’s death in an accident. However, meeting a boy who orders a special wreath makes him reflect and re-build his relationship with his family. The film successfully portrays subtle emotions in the telling of this story with professional skills.
“The film explores relationships between people under the theme of death. At the funeral of my grandfather, I questioned whether he would be happy to see lots of flowers as he had never received any in his life. However, I could not get the answer from him anymore. I always cherish my relationships with others, but death means a final parting. I hope my film can make people cherish the opportunities to talk to others while they can,” she said.
Winning the awards has increased her confidence to pursue her dream of becoming a film director. Currently working with a famous director Mr Chan Gor, she hopes to produce her own influential works in the future. She thanked the teachers and students at SCM for supporting her in producing this award-winning film. “The programmes in SCM help students develop creativity by encouraging them to explore different media and artworks,” she commended. 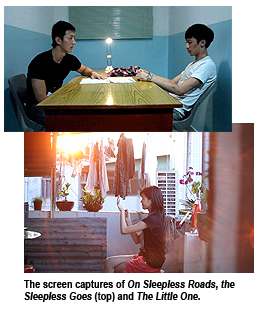 Ms Lam’s On Sleepless Roads, the Sleepless Goes probes into police power and shows how suspicions arise between the police and the public through a crime story, while Ms Tam’s The Little One depicts the love between a young boy and his stepsister. The two films were awarded for their originality and innovative presentation skills.
The Fresh Wave 2012 - International Short Film Festival organised by the Hong Kong Arts Development Council promotes young local filmmakers and provides a platform for showcasing their works.