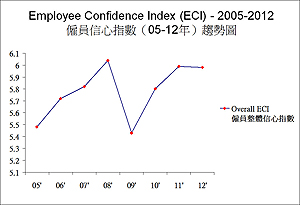 Local employees are more confident about the job market but their overall confidence in their jobs remains similar to last year’s levels, according to a survey conducted by the Department of Management at City University of Hong Kong (CityU). The survey also showed that most citizens agreed that the current statutory minimum wage was appropriate and that they were inclined to support legislation for standard working hours.
CityU’s Department of Management released its report on Hong Kong Employee Confidence and Opinion about Minimum Wage and Standard Working Hours Survey 2012 on 24 May. In the survey, conducted in April this year, 653 Hong Kong citizens in full-time employment (aged 18 or above) were asked for their views about their jobs in terms of well-being, job security and job prospects as well as about legislation for the minimum wage and standard working hours.
The annual survey is one of several conducted by CityU that gauge the overall social and economic situation in Hong Kong. It aims to probe the perceptions of local employees about their jobs and help employers formulate related human resources policies.
Respondents were invited to rate their confidence in terms of well-being, job security and job prospects as well as their perception about the overall job market. Their ratings, on a scale of 0 to 10 in an ascending order, were compiled as the Employee Confidence Index (ECI). The mean value of the ECI was found to be 5.98, very similar to last year’s level. Confidence in the overall job market rose by 0.67 points to 5.34, which is the highest score since the launch of the survey in 2005.

Employees working in the financial, insurance, real estate and business service sectors had the highest level of confidence (6.31), whereas those in the manufacturing industry reported the lowest (5.71).
Compared with last year, there was no significant change in the “Well-being” component. Respondents remained largely satisfied with their relations with colleagues (7.53) and felt positive about their job performance (7.05). Regarding “Job security”, confidence in retaining their current position jumped 0.93 points to 8.3, but perceptions about company prospects dropped 0.28 points to 6.82.
Respondents were asked to indicate their level of agreement for the minimum wage legislation on a scale of 1 to 5. Compared with last year, more people supported the legislation (3.51) and agreed with the statement that “The benefits outweigh the harms” (3.26). Also, many believed the legislation would cause a rise in inflation (3.53) but they remained neutral towards the statement that “Legislation on minimum wage will cause a rise in the unemployment rate” (2.95).
In addition, 62% of respondents agreed that the current minimum wage of $28 per hour was appropriate. The majority (77%) opposed the idea of adjusting the minimum wage downward at a time of economic recession; yet 69% agreed that the minimum wage rate should be adjusted upward to $32.1 on average when the economy is booming. For those who agreed to a reduction in the minimum wage when the economy goes down (19%), the average acceptable rate was $24.7.
“There was a fear in the community that legislation for the minimum wage would cause a rise in unemployment rate. However, since the introduction of the minimum wage in May last year, the unemployment rates in Hong Kong have remained stable and even improved slightly. It suggests that the current level of the minimum wage is generally accepted by all sectors in society,” said Dr Olivia Ip King-ming, Associate Professor of the Department of Management, who co-conducted the survey with Chair Professor Leung Kwok in the same department.
A new component concerning legislation for standard working hours was added to this year’s survey. Respondents were asked to indicate their level of agreement on a scale of 1 to 5 with given statements. Respondents tended to agree to legislation for standard working hours (3.6) and the statement that “standard work hour legislation will improve the life quality of employees” (3.72). They tended to disagree that legislation on standard working hours will impair the competitiveness of Hong Kong (2.75). While the actual working hours of respondents were 50 per week on average, they indicated that the ideal working hours per week should be 45.
In addition to announcing the survey results, the Department of Management invited several distinguished speakers to share their insights and experiences in retaining and motivating their employees through effective non-monetary incentive programmes. The speakers included Dr Michael Chan Yue-kwong, Chairman of Café de Coral Holdings Ltd, Dr Ngan Lei-tjen, Head of Service Quality Strategy and Development, Standard Chartered Bank, and Dr Tse Ka-kui, Chairman of the Hong Kong Social Entrepreneurship Forum.