City University of Hong Kong (CityU) named Student Residence Hall 9 as the Sir Gordon and Lady Ivy Wu Hall at a ceremony on 18 April in appreciation of Sir Gordon Wu’s contributions to the development of CityU and the education sector.

Sir Gordon Wu Ying-sheun, Chairman of Hopewell Holdings Limited, is a prominent entrepreneur and philanthropist. He has shown great support to CityU over the years, serving as Council Chairman in 2004-2006. His visionary leadership has been widely recognised with many local and overseas universities conferring him with honorary doctorates. CityU conferred an Honorary Doctor of Social Science on Sir Gordon in 2007. He is also an outstanding engineer, responsible for many infrastructure projects in Hong Kong, the mainland and Southeast Asia.

Lady Ivy Wu Kwok Sau-ping has played an active role in numerous charitable organisations such as the Hong Kong Red Cross and the Red Cross China. 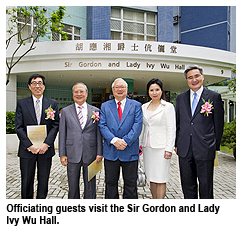 Speaking at the ceremony, Dr Norman Leung Nai-pang, Pro-Chancellor of CityU, thanked Sir Gordon for laying the foundations for CityU’s ongoing success, providing leadership and guidance to the University when he was Council Chairman.

“The leadership that Sir Gordon has shown to Hong Kong is also seen in his many civic activities and community duties. Both he and Lady Ivy Wu have been supporters of many worthy causes over the years, and their generosity will not be forgotten easily,” Dr Leung said.

Mr David Sun Tak-kei, Council Chairman of CityU, encouraged the students to model themselves on Sir Gordon, especially his innovation and leadership.

“When our students wish for an inspirational figure to motivate them in their studies, they need to look no further than Sir Gordon. His work is a perfect illustration of why discovery and innovation are so crucial to the future of Hong Kong,” Mr Sun said. 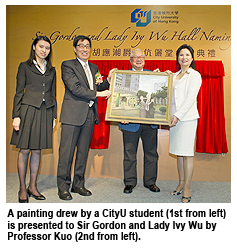 Sir Gordon said attending the ceremony was very much like a homecoming, as he could recall many good memories, including lively meetings with students. “The University’s progress over the last twenty years, growing in statue, not only in Hong Kong but also all over the world, is testimony to the hard work of many dedicated faculty and staff. Let’s hope CityU will grow from strength to strength,” he said.

Professor Way Kuo, President of CityU, expressed his deep thanks to Sir Gordon and Lady Ivy Wu for their generous support to CityU and the education sector over the years. “His generous donation is a wonderful gift, and it will be used for the development of the entire campus, assisting students through scholarships, helping to organise special celebratory events, and in particular boosting the CityU Philharmonic Orchestra,” Professor Kuo said.

“This hall, and many other aspects of CityU’s development, is due to the work of these two bastions of Hong Kong life, and we thank Sir Gordon and Lady Ivy Wu from the bottom of our hearts,” he added.

Sir Gordon and Lady Ivy Wu Hall was first used as a student residence in January 2006. It has 176 rooms and can house 337 undergraduates. The hall established a scholarship in 2006-2007 for outstanding students who have contributed the most to hall life.

Hall life is part of the University’s efforts to enrich the student learning experience. By letting students study together and live in a culturally diverse environment, the University wishes to help students enhance their communication skills and develop a broad knowledge base to cope with future challenges. Located on Cornwall Street, the CityU student residence complex currently has 11 blocks, providing accommodation for some 3,500 students. This space helps meet increased demand stemming from the implementation of the new 4-year undergraduate curriculum and the increasing number of international students on campus.