The Academy of Korean Studies has awarded Professor Philip J Ivanhoe and Dr Kim Sung-moon of the Department of Public and Social Administration at City University of Hong Kong (CityU) a US$1.3 million grant for an unprecedented study on Korean philosophy. 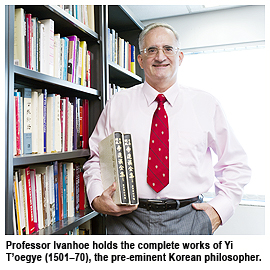 The five-year project entitled “Korean Philosophy in Comparative Perspectives” will explore sophisticated theories about ethics, moral psychology, the self, and political philosophy through the comparative study of Korean philosophy. Professor Ivanhoe is the study’s principal investigator and Dr Kim is the principal collaborator.

The funding is courtesy of an Academy of Korean Studies’ programme called the “Laboratory for the Globalization of Korean Studies”. The programme aims at fostering scholars in Korean Studies through research-oriented projects that can potentially lead to ground-breaking academic achievements. CityU joins three other universities from Canada, Germany and Japan this year to have successfully secured the grants.

Professor Gregory Lee, Dean of the College of Liberal Arts and Social Sciences, congratulated the two CityU researchers, saying this comparative study of classical Korean philosophy adds to the growing reputation of the college as a hub for cross-disciplinary intellectual debate, problem-driven research and in-depth exploration

“Funding support from the South Korean government underscores our status in the eyes of the global academic community, and we hope very much that this project will lead to fertile cross-cultural collaborations that will lead in turn to greater insight and understanding of the world around us,” he said.

The main aim of the CityU research is to bring the study of Korean philosophy into the mainstream and expose more Western philosophers to traditional Korean thought and intellectual debate. 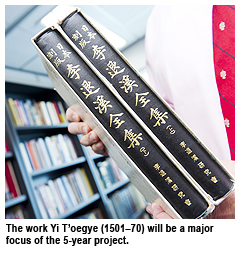 “The way traditional philosophy is done in Korea is presently not deeply engaged with, or presented in a way that is accessible to, Western analytic philosophers,” said Professor Ivanhoe, who joined CityU in 2007 after holding senior positions at Boston University, University of Michigan and Stanford University in the US.

“We wish to bridge this gap with a core team of people who know the Korean tradition well and can write for a Western audience, and at the same time we want to expose Western philosophers to Korea so they can interact with Korean scholars,” said Professor Ivanhoe, who trained in Chinese at Stanford University and was a Korean linguist with the United States Army in the 1980s.

“There is a lot of interesting work taking place in contemporary and traditional Korean philosophy that Western philosophers have no knowledge of,” he added.

East Asian and Confucian philosophy through Korean philosophical traditions offers powerful insights into pressing issues of our times, Professor Ivanhoe explained, especially in the realm of the nature of moral psychology in terms of caring, altruism, and the sense of belonging to other people and to a community.

Professor Ivanhoe will be assisted by Dr Kim, Assistant Professor in CityU’s Department of Public and Social Administration. An expert in comparative political theory, Confucianism and Korean political thought, Dr Kim trained at Yonsei University and The Academy of Korean Studies before taking a PhD in government and politics at the University of Maryland.

Intended outputs from the project will include five single-authored works, two anthologies and 16 articles all on Korean and comparative philosophy, he added.