Shanghai Liaison Office will enhance cooperation with the mainland

A ceremony and alumni dinner hosted by City University of Hong Kong (CityU) in Shanghai on 26 February marked the establishment of CityU’s Shanghai Liaison Office.

The new office will strengthen ties with the mainland government, universities, science and technology institutions, students and alumni, and it will boost academic exchanges, student recruitment and alumni relations.

In his toast at the opening ceremony, Professor Pan remarked that academic exchanges and cooperation between Hong Kong and mainland China had become closer since the return of Hong Kong to China.

“The CityU Shanghai Liaison Office initiative marks a new phase for such cooperation,” Professor Pan said. “Universities in Hong Kong are an integral part of the Chinese higher education system. They can work closely with mainland universities, drawing on each other’s strengths to broaden and deepen cooperation for facilitating the social and economic development of Hong Kong and the mainland.” He added that the Education, Science and Technology Department will strive to shore up such endeavours made by CityU and other universities in Hong Kong.

In his speech, Professor Kuo stressed the high value that CityU placed on this ceremony, deeming it not only an occasion to celebrate the opening of the Shanghai Liaison Office and but also an opportunity to meet alumni.

CityU has been committed to promoting cooperation with the mainland over the years, taking the lead among Hong Kong universities to enroll mainland students from as early as the 1990s.

The University has developed extensive academic exchanges and cooperation with elite universities on the mainland, including the University of Science and Technology, China-CityU Joint Advanced Research Centre in Suzhou, the LLM and Doctor of Juridical Science programmes for mainland judges with the cooperation of the National Judges College affiliated to the Supreme People’s Court, and the DBA programme with Fudan University. 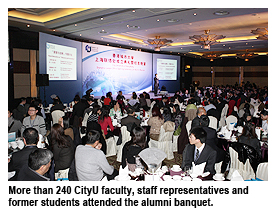 Professor Kuo also noted that Shanghai is counted as a crucial foothold for the development of CityU on the mainland, where still greater achievements wait. He also used the occasion to extend his gratitude to Shanghai Jiao Tong University for giving CityU the opportunity to set up the office on its campus.

The new office signifies a new milestone in the cooperation between CityU and mainland China in developing higher education and research and making contributions to society, he said.

Its inception will strengthen the relationship between CityU and mainland governments, educational institutions and CityU alumni, and it will create favorable conditions for scholars and students of CityU to develop their careers on the mainland, he added.

After the ceremony, Professor Kuo, Professor Zhang and Professor Zhou co-hosted a seminar on the theme of “Discovery and Innovation”, which explored approaches towards innovation for the development of higher education in China against a backdrop of fierce international competition.

The seminar was followed by a lively gathering, including Professor Kuo and other CityU senior management representatives, faculty and staff plus CityU alumni, to celebrate the establishment of the Shanghai Liaison Office. The alumni mainly came from Shanghai and its neighbouring cities, Hong Kong etc.