Overall consumer confidence has dropped in Hong Kong, mainland China and Macau compared to the previous quarter, according to a recent survey conducted by City University of Hong Kong (CityU), while confidence in Taiwan rose. It was also revealed that consumers had the weakest confidence in prices.

CityU announced on 14 January the fourth quarter results of the Chinese Consumer Confidence Index for 2010. 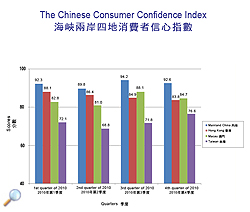 The results revealed that consumer confidence in Hong Kong declined by 1.3% on the previous quarter, with mainland China and Macau down by 1.7% and 3.9%, respectively. The highest confidence score, 92.6, was achieved by mainland China, while Macau placed second (84.7), followed by Hong Kong (83.8) and Taiwan (76.6).

Dr Geoffrey Tso Kwok-fai, Associate Head and Associate Professor in CityU’s Department of Management Sciences, is responsible for compiling the Hong Kong index. He said, “As the economy picked up, consumers reported confidence in the prospect of economic development and employment. However, they showed a lack of confidence in spending-related categories such as consumer prices and living standards. In addition, consumers in Hong Kong and mainland China were cautious about stocks. As a result, the overall confidence index has dropped.

Dr Tso said the overall consumer index for Hong Kong, mainland China, Macau and Taiwan has stayed below 100 throughout 2010, indicating a slight lack of confidence across the Greater China region. The index uses a scale of 200 (complete confidence) to represent ascending levels of consumer confidence. Scores below 100 suggest people lack confidence while scores above 100 reflect relative confidence.

Dr Tso said Hong Kong and Macau are suffering from imported inflation because of high inflation in mainland China and the rising strength of the renminbi, given the fact that most food and daily items are imported from mainland China. Subsequently, consumer confidence in both places had ebbed.

Hong Kong consumers had the weakest confidence in prices and housing purchases. Although the score in the latter category went up by 13.9% against the previous quarter, it was only 60.8, which represented an overall lack of confidence. The score of 102.5 in living standards showed Hong Kong residents were most confident in this category, yet it still fell by 3% when compared with the previous quarter.

CityU is responsible for the research in Hong Kong based on a quarterly interview with about 1,000 residents aged 18 or above who live in the territory most of the time. The 2010 fourth quarter survey was conducted from 17 to 26 December.