The rapid expansion of the internet, ever-advancing information technology, more diversified digital content and deeper and broader knowledge asset means the new digital age is going to change our culture and education in a dramatic fashion.

Against this contextual backdrop, Taiwan’s Academia Sinica and City University of Hong Kong (CityU) are co-organising the 2010 Pacific Neighbourhood Consortium (PNC) Annual Conference from 1-3 December at CityU under the theme “From Digital Content to Knowledge Asset”. The focus is primarily on issues dealing with the storage, publicity and utilisation of digital content. 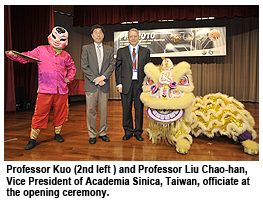 Scholars and experts from more than 60 academic institutes will share the latest progress of the digitisation of multi-discipline knowledge at the conference. They aim to build an “information bridge” to promote the preservation and dissemination of the world’s cultural heritage and the creation of new culture and knowledge. In addition, they hope to facilitate the dissemination, learning and application of knowledge.

In his welcoming speech, Professor Way Kuo, CityU President, said globalisation and the widespread utilisation of information technology have significantly enhanced the efficiency of creating and disseminating knowledge.

“This conference has set an appropriate theme for us to explore the relationship between knowledge asset and knowledge management in the digital environment, posing far reaching implications for libraries, publishers, museums and the media, and embodying a significant meaning for academics and universities, too,” Professor Kuo said.

Topics discussed at the three-day conference include copyright and the storage of e-books, the process of digitising knowledge, the dissemination of knowledge through social networking sites, the development of technology and tools for knowledge networks, the promotion of digitising art and culture, the application of digitised academic research databases, and the interactive development of language and digital archives. 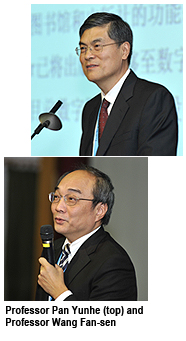 The keynote speakers were prominent scholars in the field of digital library studies. Professor Pan Yunhe, Vice President of the Chinese Academy of Engineering and President of the China Academic Digital Associative Library, called for the collaborative development of information and library sciences during his talk titled “Development and Trends of the Digital Library”. He also advocated research into digital libraries through consolidated international cooperation.

The rich treasure of culture and knowledge accumulated from the past can now be disseminated and developed through various new media. During the construction of the “information bridge” over the past decade, many libraries and museums have completed a number of digitised projects. Vast volumes of literature and the classics have been stored in digital format, making the content accessible to academics and the public through computer technology.

However, as most general readers are not familiar with the background and classification of relevant disciplines, the result is far from satisfactory when it comes to promoting the use of digitised knowledge to industry, education institutes and researchers. For example, South Korea started to use digital technology to manage its linguistic heritage early on. However, modern Korean readers are less familiar with the Chinese characters used in literary Korean in the past, which can make using Chinese keywords to search for information difficult. Other countries like Mongolia have similar problems for their digital projects.

The current major focus of knowledge digitisation is data utilisation, cross-discipline collaboration, digital learning, and knowledge management for knowledge dissemination. Participants will find out more about the skills of digital resources management, the accumulation, dissemination and utilisation of culture and knowledge, and making world culture and literature more accessible to general readers through the 30 sessions of speeches and panel discussions at the three-day conference.

PNC was founded at the University of California, Berkeley in 1993. Its secretariat was relocated to Academia Sinica in 1997. Over the years, PNC has enhanced academic exchange among institutions across the Pacific Ocean, promoted information exchange among cities and places in the Pacific Rim, and helped researchers use resources in digital libraries, digital museums and e-learning more efficiently. Through its hard work and contributions over the past 20 years, the PNC has won acclaim from the digital information technology sectors in the Pacific Rim.