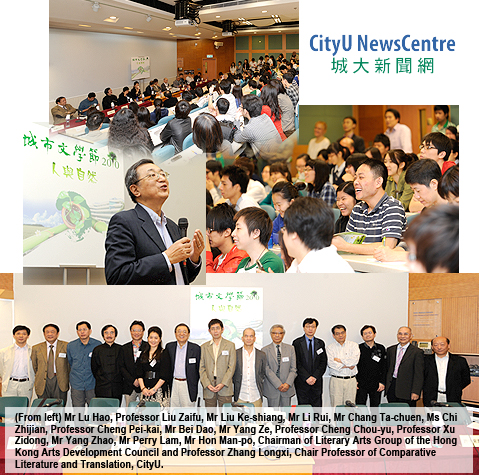 The annual City Literary Festival 2010, organised by Cultural and Sports Committee, Chinese Civilisation Centre, and Department of Chinese, Translation and Linguistics of City University of Hong Kong (CityU), is held this Friday and Saturday on 23 and 24 April.

Organising the Festival for the fifth year, Professor Cheng Pei-kai, Chairman of the Cultural and Sports Committee and Director of Chinese Civilisation Centre, felt encouraged to see so many young people in Hong Kong interested in literature in spite of the general perception of Hong Kong as a cultural desert. He said that events like this should be promoted in town. “We should establish oases within the desert, even though we may not able to turn it into a cultural city. There will be life as long as there are oases. Historically, cultural exchanges and links between the East and West depended on the oases along the Silk Route,” added Professor Cheng.

The annual City Literary Festival aims at increasing youngsters’ (local and Macau) interest in writing. A series of activities are scheduled to be held on 23 and 24 April, including the Opening Ceremony on Friday morning and parallel discussion sessions on different literary genres in the afternoon, sharing dialogues with young local writers on Saturday morning and workshops on new poetry in the afternoon. All events are open to the public.