Chair Professor Philippe G Ciarlet from the Department of Mathematics at City University of Hong Kong (CityU) has been elected a foreign member of the prestigious Chinese Academy of Sciences (CAS), in recognition of his contribution to developing and utilising mathematical tools to solve critical issues in mechanics and modern engineering, as well as promoting mathematics in China. 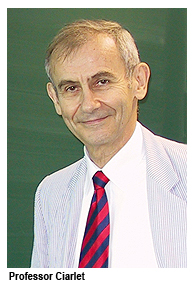 Professor Ciarlet’s studies have focused on applied mathematics and computational mechanics, contributing to the development of the mathematical theory of finite element methods. His innovative application of asymptotic analysis has established a mathematical model and introduced a fundamental yet comprehensive theory for elastic thin objects (ie; the plates, shells and their combinations) that frequently exist in modern industry. This portion of his body of work is often referred to as Ciarlet’s Plate Theory, or Ciarlet’s Shell Theory, in scientific papers.

Professor Ciarlet also developed a new model and methodology on the theory and numerical computation of elastic shells, one of the most difficult areas within mechanics. In addition, he has solved a series of critical issues in fluid and solid mechanics.

The CAS highly commended Professor Ciarlet for his contribution to the development of mathematics and work promoting and advancing the discipline in China. He first visited China in 1982 and delivered lectures and organised and participated in academic conferences or workshops at renowned mainland universities, such as Peking University, Tsinghua University and Fudan University. His achievement in the study of elastic mechanics systems has led Fudan University to undertake research in this field.

“The honour bestowed on Professor Ciarlet represents the mainland’s highest recognition of the achievements and strengths of the faculty at CityU. With an equal emphasis on research and teaching, CityU and its colleges, schools and departments as well as faculty members have forged a close relationship with the mainland. We will continue to support the social and economic advancement of Hong Kong and mainland China through outstanding research and professional education,” said Professor Way Kuo, CityU President.

Professor Ciarlet said he was deeply honoured to have been elected a foreign member of such a prestigious institution. “I regard this election as a perfect illustration of the excellent state of academic cooperation between France and China. It is a shining example that confirms ‘East meets West’ in Hong Kong, even in mathematics!”

He added that the award provides a strong incentive to further cement his association with CityU, Hong Kong and the mainland. “As I have often said, being in Hong Kong, and in particular CityU, has been a source of constant joy for me since 2002,” Professor Ciarlet said.