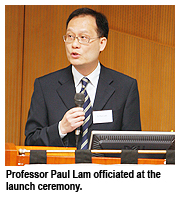 The City University of Hong Kong (CityU) chapter of the international honour society Kappa Delta Pi (KDP) was inducted on 22 September in a solemn swearing in ceremony conducted on campus.

The induction into the century-old society is a first for a university in Asia, reflecting CityU’s successful and continued dedication to continuous professional growth.

During the ceremony, 23 CityU colleagues were initiated in recognition of their outstanding contributions to education. Professor Paul Lam Kwan-sing, Vice-President (Student Affairs), was the officiating speaker. Mr David Santandreu, Senior Education Development Officer of the Education Development Office and President of KDP CityU Chapter, who earlier in the year received Teacher of Honour status from KDP, led the swearing in ceremony. 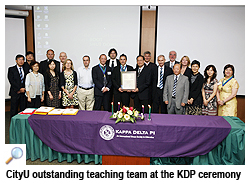 “Education is an ever-changing environment,” said Professor Lam. “We are preparing for the transition to a four-year degree curriculum, have weathered the global financial downturn, and trends like private universities reflect broader international currents. It is important, and encouraged by societies like KDP, to think locally and act globally.”

The KDP International Honour Society in Education supports the professional growth and teaching practices of educators throughout the world. Since 1911, the society has recognised excellence in education, advanced professional development, provided a reasoned voice for significant issues and linked communities of educators.

In conjunction with the KDP CityU Chapter launch, the gathering also served as the opening session of the new Strategic Teaching Enhancement Programme (STEP) 2009. The session was dedicated to GE-TEACH: Progress Report on CityU’s General Education Programme Implementation. 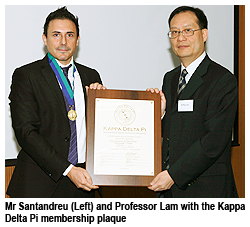 Five speakers provided an update on the progress of General Education (GE) at CityU, with the sharing of specialist and expert knowledge acquired from the GE Institute. They also showcased some best practices in GE found in the US.

Professor Hoshmand highlighted the growth of GE at CityU, pointing out that the number of courses had swelled from eight in 2008 to 26 approved courses today. Another 26 course proposals had been sent to external reviewers for assessment, he added.