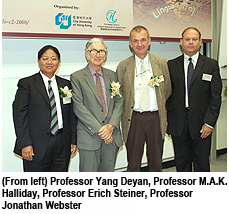 Plenary speakers at the conference include renowned international scholars in the field of translation, and come from as far afield as Germany, Australia, Brazil and Iran, as well as CityU’s Dr Zhu Chunshen, Associate Professor, Department of Chinese, Translation and Linguistics (CTL).

Professor Jonathan Webster, Director of HCLS and Head of CTL, explained the objectives of the event. “The conference sets out to explore translation, relate it to other forms of communications in multilingual contexts and to suggest ways in which translation as process can, and as product may, contribute to language contact and cross-cultural communication.” 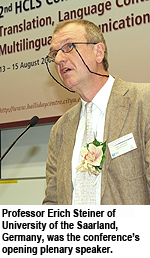 Borrowing a quote from fellow CityU academic, Professor Zhang Longxi, Professor (Chair) of Comparative Literature and Translation, Professor Webster illustrated this objective by comparing cultures. “The fact is that similarities and differences exist everywhere, within one culture as well as between or among cultures. Although an understanding of different cultures is often difficult and imperfect, it has always had a chance in human communication. The inference must be that cultures are not and cannot be totally incommensurable or untranslatable.”

Professor M.A.K. Halliday, Advisor to HCLS and Emeritus Professor of Linguistics at the University of Sydney, stressed that the conference was focused on both the theoretical and practical aspects of translation. He said the staging of the conference in Hong Kong would ensure that Chinese and English were well covered but added 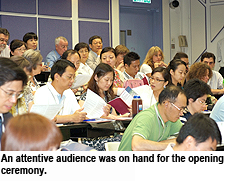 that a host of other languages were also represented, including Korean, German, Spanish and Japanese.

Details of the conference are available at http://www.hallidaycentre.cityu.edu.hk/hcls-c2-2008/

CityU hosts conference on the languages taking on the world