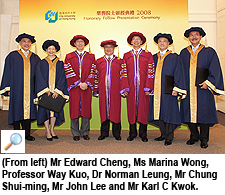 The First Honorary Fellow Presentation Ceremony of City University of Hong Kong (CityU) was held on 18 June to bestow on four distinguished persons the title of Honorary Fellow in recognition of their distinctive contribution to the development of, and service to, the University. They are:

(Short biographies of the honorary fellows)

In his welcoming address, Mr Chung said it was a great pleasure to see the contribution to the development of the University by all four recipients properly recognised and rewarded.

Mr Edward Cheng addressed to the ceremony on behalf of the Honorary Fellows. He said they each had witnessed the remarkable development of CityU as it came to be recognised as one of the leading universities in the world. They were, he said, proud to be associated with this achievement. “This, of course, is testament to the hard work of the staff, but I like to think that the Council has also helped create a supportive environment, which has made a small contribution to this success,” he said.