Uniting the worlds of science and economics with that of art was the focus of the recent City Cultural Salon held at City University of Hong Kong (CityU). 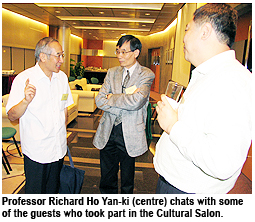 Economist and Acting President, Professor Richard Ho Yan-ki and phycisist Horace Ip Ho-shing, Professor (Chair) of Department of Computer Science, shared their interpretations of Chinese painting and calligraphy from a uniquely scientific point of view at the September 20 salon.

With soft lighting providing a gentle ambience, more than 30 scholars, guests, teachers and students from CityU took part in “City Cultural Salon - Sticking to CityU, Amusing Oneself in Art” staged by the Cultural and Sports Committee in the multi-media conference room.

Professor Cheng Pei-kai, Director of the Chinese Civilisation Centre and Chairman of Cultural and Sports Committee, welcomed guests with a brief introduction on the background of “City Cultural Salon”, while Professor Ho praised its reintroduction to the university’s agenda. 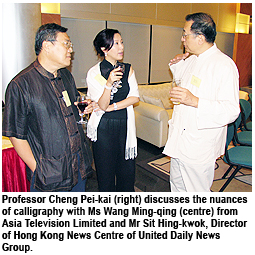 One cannot underestimate the influence of one’s teachers when learning Chinese painting and as a pupil of Mr Lin Yi-zhi, who in turn is the star pupil of Mr Chen Da-yu, famed for painted depictions of chickens, Professor Ho has a fine lineage.

With decades of experience and learning at his disposal, Professor Ho is able to express himself with a vivacious yet smooth painting style. Although he has taken part in several joint exhibitions and personal exhibitions of his work, he modestly argued that his painting techniques were so rudimentary that he was better qualified to espouse his views on the buying and selling of shares, rather than showing off his artistic skills in front of peers and experts.

It is exactly that expertise as an economist, however, that brings such a unique efficiency to his work. Professor Ho, who also had a great interest in biology, discussed the ambiguous role of colour in his creations.

“When I first learned painting, I started with landscape painting, which is full of ink and colour”, he said. “In recent years, I have changed to the flower-bird painting style that places particular stress on black and white as well as ink painting. Nevertheless, I have a better understanding of colour.”

Applying the watercolour effect to visual neurology, Professor Ho explained how colour was diffused visually so that the object looked three-dimensional and the surface of the object offered a tactile sensation.

Professor Ho considered himself something of a vagabond, migrating from one field to another. He interpreted the reason for the “ink first and color second” approach of Chinese ink painting to his understanding of the renowned philosophies of Lao Zi and Chuang Zi and a detachment from worldly desires and materialism. In essence, the conclusion was that to reach the highest realm of art an observer should reach a self-transcending state by breaking away from the relationship between the observer and the observed when viewing any object.

“In such a state, colour does not play an important role in painting because the brightness or darkness of Chinese ink is enough for the expression of intrinsic spirits”, said Professor Ho. 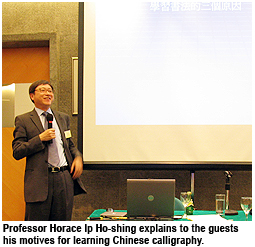 Professor Horace Ip Ho-shing has studied Chinese calligraphy for more than 10 years. A video shown at the salon provided an insight into the bold and vigorous strokes of his script. He laughingly highlighted how he had contracted a professional disease in coming to heavily rely on two things when making speeches or writing reports: Powerpoint and Multi-media. He then explained his three reasons for learning Chinese calligraphy, namely his work needs, living needs and future needs.

As a major of physics, Professor Ip was fond of analysing things from that perspective. Rather than discussing the technical skills behind his calligraphy, he compared the ebb and flow of waves to vigour of his brush strokes. Meanwhile, he created different strokes, movement, tactile sensations and three-dimensional qualities in his Chinese calligraphy through computing.

Although the two professors did not specifically discuss their personal motivations for learning Chinese painting and calligraphy, Professor Ho had shared his inspiration in a previous article: “As a traditional man, an administrator and an economist rooted in the neoclassical school, I have no channel to release my emotions. If such a person wants to release his emotions in public, it will not be accepted by society. However, my paintings can reveal my exact thoughts without any omissions, just like a photocopier.”

Guests from CityU or outside the university indicated that this Cultural Salon had been an unusual one.

“It gives people an astounding feeling when Chinese traditional art is explained in a scientific way and the means of artistic expression is analysed using modern skills. This will undoubtedly help in the communication with foreign fellow members in this field who have little understanding of Chinese art philosophy”, said Mr Szeto Yuen-kit, curator of Xubaizhai Gallery of the Hong Kong Museum of Art.

Ms Wang Ming-qing, presenter and scriptwriter of Asia Television Limited, pointed out that she had viewed a great deal of original Chinese paintings and calligraphy and interviewed hundreds of renowned artists. All of these artists talked about the origin, schools and means of artistic expression of Chinese painting and calligraphy from the angle of connotative meanings being sensed but not expressed in words. She said: “It was the first time I heard somebody explaining Chinese calligraphy from a scientific perspective and explaining points and lines in Chinese painting from the angle of optics, which can greatly enlighten us in a re-examination of Chinese traditional artistic works.”

At the end of the Cultural Salon, Professor Cheng, as the host, gave thanks to the guest speakers and those in attendance. Professor Ho thanked the guests from outside the university and presented his album of paintings to them.