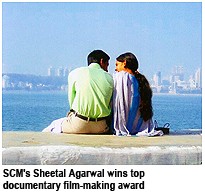 Her award-winning film, Ordinary Lives, highlights the social, cultural, infrastructure and political issues that affect the lives of a family of ten living in a slum in Mumbai.

CityU is dedicated to encouraging students to showcase their creativity by participating at international festivals.

The annual FLiFF presents compelling and thought-provoking international films at its base and claims, at 37 days, to be the longest film festival in the world.

Ms Agarwal, who graduated from the SCM with a distinction this year, said she set out to make a film that explored social issues. “In my film I wanted to know more about the people living in the slums and find out how the conditions affect their lives.” 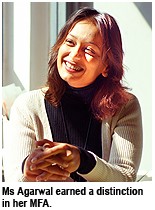 Her win brings her a US$1,000 Kodak product grant and an opportunity to participate in Kodak's Cannes Programme, which promotes the talents of emerging film-makers from around the world at the world’s most prestigious film festival. She also gets to be a judge at FLiFF’s2006 Student Competition. She is currently looking for a distributor for her film.

Ordinary Lives also screened at the Golden Lion International Film Festival in October in , and will screen at this month’s India International

The 38-minute documentary also won awards for Best Editing and Best Screening at Medialogue, the annual showcase for graduate work in the SCM. Her film Home and Away, a 29-minute portrait of the lives of Philippine migrant workers in Hong Kong, won the Grand Prize at the 5th Beijing International Students Film Festival in 2004 at the .

Ms Agarwal graduated with a first-class degree in commerce from K C College, Mumbai, and a diploma in commercial art from , Mumbai, before joining the SCM’s graduate programme.

“The SCM’s very open-minded and creative. You are encouraged to be what you want to be. The teachers are the real experts and I am very grateful for their support. They are dedicated to helping you fulfil your potential,” she said.

Dr Fore, an associate professor in the SCM who has advised Ms Agarwal on her projects, said Ordinary Lives was a  touching, insightful documentary. “Sheetal has an uncanny knack for getting the people who appear in her documentaries to trust her and speak openly,” Dr Fore said.

Ms Agarwal also expressed her thanks to the people of Mumbai who helped her make the film. “I want to thank the family I filmed for having trusted me so much,” she said.