, Dean of Research and Graduate Studies, expounded on plans to boost applied research at the University Development Forum on 5 October. The forum was the first of its kind organized by the Working Group on Applied R&D, headed by Professor Wong.

In his presentation, titled “Applied Research: The Way Forward”, Professor Wong spelt out the role of applied research at CityU, the distinction between basic and applied research, and a number of policies and procedures currently undertaken by the University to support applied research activities.

He outlined a number of recommendations by the Working Group to further enhance the applied research culture at CityU.

The significance of applied research to the University was clearly set out in the new role statement that the University Grants Committee (UGC) gave CityU in 2004 and in the University’s 2003- 2008 Strategic Plan, Professor Wong said. 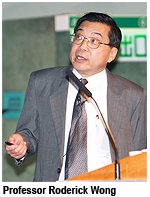 While reviewing the current situation of applied research, Professor Wong said CityU had made its mark in society with a number of successful technology start-ups and had established strong links with industry and the community. “85% of our research belongs to the applied research category,” he said.

“Nonetheless, there is still much room for developing our applied research and technology transfer activities,” he said.

He drew on two  projects - the base station antenna and the wireless charging platform - to exemplify applied research which had developed either through basic research or a specified need. 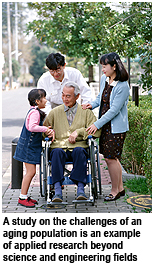 “Applied research is needs driven, application led, and aims at solving an existing problem,” Professor Wong said. But he made it clear that applied research went beyond the science and engineering fields, quoting the Centa-City Index and studies on the aging population in as examples.

Building on such a solid foundation to further enhance the applied research culture at CityU, the Working Group recommended carrying out a critical review of the various policies; giving substantial weight to applied research performance in personnel decisions; requesting departments/schools to report their applied research achievements to the University; providing more resources to support research infrastructure; and allocating more funding for patent application and applied research.

Professor Wong concluded his presentation by urging staff to contribute to boosting the culture of applied research by proactively engaging in discussions at department, faculty/school and University levels. 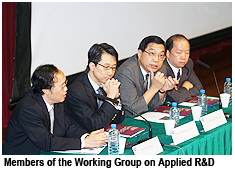 After the presentation, Professor Wong moderated a Q&A session with members of the Working Group: Professor Matthew Lee, Associate Dean of the Faculty of Business, Professor K M Luk, Head of the Department of Electronic Engineering, and Mr H Y Wong, Director of the Technology Transfer Office.

The first question asked how the Working Group differentiated applied research from the application of professional knowledge. One member of staff pointed out that many colleagues sat on high-level committees that had the potential to shape social and professional policies. Was this applied research?

This point was further developed in the next question when a member of the audience asked if writing a book about a new way of teaching, for example, qualified as applied research.

In reply, Professor Lee said applied research had to be original, intellectually challenging, and directed at solving problems in society, business or industry. He reiterated that advice given on an ad hoc basis that did not require a significant amount of research would not qualify.

“But if the advice involves doing some original research and maybe results in a substantial policy document, it would qualify as applied research,” he said.

A colleague asked a related question. How will the Working Group assess the quality of applied research? Professor Luk said any judgment call on quality had to be based on the impact, or the potential impact, of the research.

Mr Wong said quantifying the impact of applied research was a challenging task. 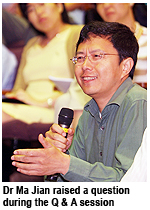 “City U researchers have produced some very influential policy papers for the government in the past. This has a really great impact, but it cannot be measured in the same way as in science and engineering,” Mr Wong said.

Professor Lee acknowledged the complexity of the issue. He suggested that since applied research was problem-driven, one important criterion was the extent to which the research solved a problem and produced results.

In terms of presenting evidence to support claims, he said a numerical score, i.e. how much money was generated from a patent, would be appropriate in some fields, but in areas such as writing and consulting on policy papers that could result in significant government legislation changes, more descriptive and qualitative evidence would be required.

Professor Lee wrapped up this point calling on staff to contribute to this debate. “We’re really looking for contributions from individual faculty members in different disciplines to put forward suggestions regarding more concrete guidelines that measure the impact and the quality of the solutions that result from problem-driven applied research,” he said.

A member of the audience asked the panel how it would assess proposals for an Applied Research Grant, introduced at the start of the 2005-06 academic year to support projects leading to Innovation and Technology Fund (ITF) applications.

Mr Wong said the most important criterion was the potential for success. “We want results that show and the UGC that this applied research can influence society,” he said.