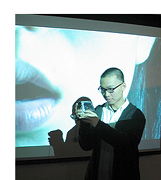 Students of CityU's School of Creative Media(SCM) are making their mark on the local and the international scene. Hamlet Lin Yiu-bong and Chan Tze-him, year three and year two SCM students respectively, showcased their media production and creative narration skills in the recent Radio Hong Kong Television (RTHK) Putonghua Festival Short Movie Contest. They won the Championship and the First Runner-up prizes out of 49 entries. The Contest was part of a programme organized by the Standing Committee on Language Education Research and RTHK to arouse the general public's interest in learning Putonghua.

Hamlet's entry was a movie about young people meeting a female ghost who happened to be a hard-working Putonghua learner! "Indeed I want to encourage people not be afraid of learning Putonghua, which has become more and more popular nowadays," Hamlet explained.

Both students put into practice what they learned about sound effects, film editing, narrative and writing skills, from their lectures and instructors in SCM.

The judging panel was impressed by the students' originality and creativity in presenting story ideas and grasping audience's emotions, according to Mr Winston Yang and Dr Lousia Wei , Lecturer and Assistant Professor of SCM, respectively, who served as adjudicating members.

Since its establishment in 1998, the SCM has been encouraging its students to gain exposure by entering into media arts festivals and competitions, both local and international. Their talent has been honored with top awards in renowned events such as the New York University International Student Film Festival, the International Short Film Festival in Oberhasuen, Germany, and Festival in Videotage Video Contest. For more details on SCM students' achievements, please go to www.cityu.edu.hk/scm/news/awards.htm .