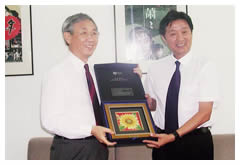 CityU fosters creative ties by bringing together young people with different cultural and social backgrounds — students from the School of Creative Media (SCM) and from the Beijing Film Academy (BFA).

Building on the success of previous student exchange programmes, on 2 July, CityU delegates President Professor H K Chang and SCM's Acting Dean Mr David Smith visited the BFA, the most prestigious mainland institution specializing in the training of professionals for film and related industries, where renowned directors like Mr Chen Kaige and Mr Zhang Yimou graduated. They were received warmly by the BFA President Zhang Huijin and discussed the possibility of a stronger bilateral relationship involving more student and faculty exchanges, joint projects, and joint degree programmes. Both sides were keen on the ideas and should soon enter into a new contractual relationship. 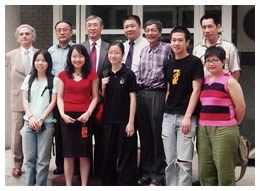 "The BFA is particularly interested in our advanced digital technology, and we believe that our students can learn a lot from their work in performing arts and motion picture production," said Mr Smith. Four SCM students currently at the BFA also met the CityU delegation and reported a positive learning experience. "The new experience has encouraged me to become more outgoing,"one student said.

Ties with BFA were formed when SCM Assistant Professors Lester Chan and Julian Lee lead a group of students to visit the academy in 2000. Subsequent delegations and exchanges followed. In 2002, a formal student exchange programme began, each institution sending four students. It is believed that SCM students can benefit from the cultural content and BFA students can further their skill in digital animation.