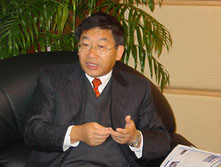 Despite its long and rich cultural heritage, China must advance in the sciences and technologies to become a stronger country," said Professor S T Lee, speaking to Linkage after being awarded Second Prize in China's National Natural Science Award 2002 at a ceremony on 28 February. "I am very glad that China has begun to take science and technology seriously and I believe we can look forward to a bright future for our country," the Chair Professor of Materials Science in the Department of Physics and Materials Science and Director of CityU's Centre of Super-Diamond and Advanced Films (COSDAF) said.

It has long been Professor Lee's aspiration to help his country move ahead. "It must have something to do with my upbringing," he said. He came to from on the mainland with his father, a senior Kuomintang officer, when he was about four years old. His schooling did not follow the British colonial stream. Instead, the schools he attended were either sponsored by political groups or religious or charity organizations. "We were very poor at the time. We went to whatever schools charged less," Professor Lee recalled. "Perhaps that was why I was less influenced by colonial and instilled instead with a sense of Chinese nationalism."

University points to the road ahead

Life in was not easy for the Lee family. They moved from place to place in the territory, from Lai Chi Kok to , from Ping Shan to Yuen Long. "My father was a graduate of the in . Unable to speak even a sentence in Cantonese, he tried to make a living raising chickens and pigs. And my mother couldn't get out of bed because of a serious illness."

Each time they moved, Professor Lee had to go to a new school. "When I was in grade four, I had to walk from Yuen Long to Ping Shan to go to school. That lonely mountain trail seemed endless. The longer I walked, the further it seemed. Plus, the noise made by the sand I kicked up behind me sounded like a ghost chasing after me. I was so scared, I stopped going to school for months until my brother found out."

Later, Professor Lee's father secured a job at a school in Tiu King Leng ( Rennie's ). Professor Lee then settled into Tiu King Leng's school system, which was not recognized by the government at the time. There, he finally found a stable environment for studying. But the family's worsening financial situation forced Professor Lee's father to send his three boys to the Rennie's Mill Student Aid Project (now the Hong Kong Student Aid Society) for homeless children, where they lived in a dormitory.

There was no doctor there. The missionaries who ran the Project saw my potential and wanted me to go to medical school and become a doctor. But the schools I had gone to used only Chinese as a medium of instruction. My English was not good enough to go to the only university that had a medical school at that time. Instead, I was accepted by the of and majored in chemistry."

Until university, Professor Lee had known few straight roads, whether in life or in school. Things changed dramatically, however, at university. After graduating from the of , he received several scholarships to study abroad, acquiring an MSc in Chemistry from the in state, and a PhD in Physical Chemistry from 's . Later, he moved on to the , , to do postdoctoral study. "The money I made at the time was enough to support my wife and two kids. I also brought my father to live with us and helped my younger brother to study in the States."

A sense of achievement 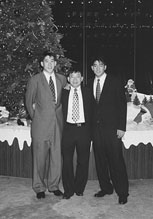 After his academic studies, Professor Lee found a well-paid position with the Eastman Kodak Company in , working on product development and analysis for 18 years. "Living in the West for a quarter of a century, I did what I could do," he recalled. "But I still hadn't done what I wanted to do for my country. Plus, some of my family was here." With this in mind, Professor Lee left the and joined CityU's Department of Physics and Materials Science in 1994. He set up the Department's Super-Diamond Laboratory, which, in 1998, became one of the University's six research centres and was renamed COSDAF. "It's true that I did not have much tertiary teaching experience. But if you know the subject well, what you need is only passion, which I have." In comparison with industrial research work, what is taught at university is not all that difficult, he added.

Since his return to the academic world, Professor Lee has supervised the projects of about 50 research and postdoctoral students. He is also the Principal Investigator of 18 research projects funded by the Research Grants Council and the Innovation and Technology Commission. His grants to date total $35 million. "I do not have any special talent. But I do have a good nose. I am often right in picking the right project," he said. For him, the Nobel Prize Laureates may not be the world's smartest, but "they are smart enough to pick and complete a Nobel Prize-winning project."

Before he decides on a topic, Professor Lee always reviews and assesses it carefully. He often asks himself and his students the following questions: Is it going to be highly rewarding? Can we tackle it in terms of resources? Is it going to have an impact locally or internationally? "It's important to know what's important," he said.

Under his leadership, COSDAF has excelled in several leading areas in science, including pioneering advances in nanowire research, which put CityU on the international research map. "Setting the direction is the most important," said Professor Lee. "As a research centre, we are the smallest and youngest, but we are one of the most vibrant and reputable. It's because we have chosen an area that is new and useful and at the same time practical in terms of our limited resources and talent." Any research project that demands a huge investment is not realistic in , he added.

OWorking for a corporation, the biggest contribution I could make was boosting the company's profits," Professor Lee said. "Working in academia is quite different. It allows me to make contributions to the cultivation of young talent and the creation of knowledge, in addition to helping local companies. I feel I have achieved something."

He added: "Many people do not wish to talk about growing up in Rennie's . But I am proud of it. I learned very early on that if I worked hard, I could do anything I wanted.