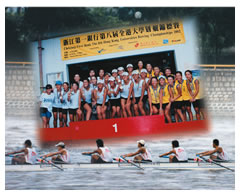 A season's worth of training and hard work has paid off for City's oarsmen and oarswomen at the 8th Hong Kong Universities Rowing Championships 2002.

"Determination, perseverance and teamwork are keys to success in the rowing competition," said Mr Chan Yu-kit, Chairman of the University rowing club.