Creativity and a keen interest in the deep cultural traditions of Europe have earned prizes for two CityU students at the University's First Web Contest on Europe.

Third-year Higher Diploma in Applied Chinese Studies student Yoko Leung Lai-fun was awarded the championship prize in the European Arts and Philosophy category, while classmate Fong Sing-ha was named champion in the Economics and Political Formats category. They each received a $2,000 award from Mr Patrick Coustance, Attache de francais (Cultural Services) of the French Consulate of Hong Kong, which sponsored the prizes. Miss Leung, who also won the overall championship, was awarded a further $2,000 cash prize.

The Web Contest on Europe, the first of its kind organized by a Hong Kong university, aims to promote website design on Europe in three categories: Arts and Humanities, Political Science and Economics, and Science and Engineering. The French Section of CityU's Division of Language Studies organizes the contest, timed this year to commemorate the launch of Europe's new currency, the Euro. The awards ceremony was held on 22 February. Entries were judged for their creativity, originality, and content relevance. 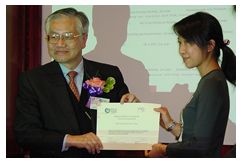