A vision for peaceful development in East Asia 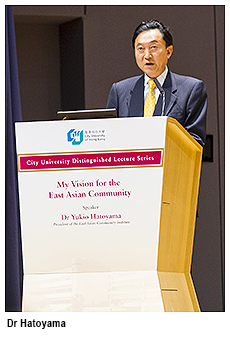 A former prime minister of Japan outlined his vision for the future development of an East Asian Community at his talk under the auspices of the City University Distinguished Lecture series on 13 November.
Dr Yukio Hatoyama, President of the East Asian Community Institute and the 93rd Prime Minister of Japan, based his vision on the key idea of open, regional cooperation under which the participating nations cooperate in various fields and through numerous functional community networks within the region with the ultimate goal of bringing the countries in the region together as peaceful partners.
To achieve this goal, he said, it was first of all important to make concrete, cooperative progress in a wide range of fields including trade, investment, finance, education and addressing environmental issues.
“We will need to build up trust in relationships between nations and between peoples in a variety of fields,” said Dr Hatoyama, who received an Honorary Doctorate in law on the day prior to his talk.
“We must be sure we resolve not to create an exclusive community that only includes countries with certain characteristics or to create an economic bloc with the aim of opposing other regions. Rather, we must strive to create a flexible, open community and encourage the participation of nations such as the US and Russia in certain fields,” he added. 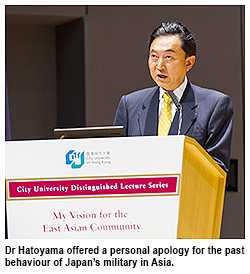 Dr Hatoyama made clear his own deeply personal commitment to promoting peace and fraternity. During his talk he apologised for the deaths of Chinese civilians in Nanjing in 1937.
“As a Japanese citizen, I feel that it is my duty to apologise for even one Chinese civilian killed brutally by Japanese soldiers and that such action cannot be excused by saying that it occurred during war,” he said. “I feel strongly determined to do all I can to make even a small contribution to the improvement of the relationship between Japan and China.”
His speech also elaborated his belief to learn more about the teachings passed down from ancient China, stating that Japan had become more materialistic due to a lack of emphasis on “filial piety, respect for seniority and loving benevolence”.
Fraternity was a treasured concept, he said, and is a vital component for future international relations. “Fraternity is by no means an outdated idea and should rather be the most important principle in today’s global politics. My simple understanding of fraternity is that it is based upon the twin principles of autonomy and coexistence. In other words, fraternity means respecting one’s own dignity while also respecting the dignity of others,” he said.
The creation of an East Asian Community was no pipedream, he 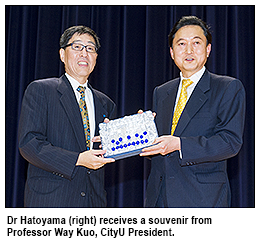 “Cooperation is already underway. For example, the Campus Asia project aims to create an environment in which university students across Asia can learn without concern for national borders. Campus Asia is the Asian version of the Erasmus scheme already operating in Europe,” he said.
Dr Hatoyama added that he hoped CityU would play an important role in the future of the scheme. “I hope that in future we can greatly expand Campus Asia to encompass numerous other universities and countries,” he said.
After discussing a range of geopolitical issues impacting international relations in the region such as the territorial disputes over the Senkaku Islands (Diaoyu Islands), he argued that the unification of East Asia would lead to the peace in Asia, which would contribute to the security in the whole world greatly.
“Every great historical happening began as a utopia and ended as a reality,” he said.
In his opening remarks, Professor Way Kuo, University President, outlined Dr Hatoyama’s credentials as a professor of engineering with a strong publications record, including articles for IEEE Transactions on Reliability, the flagship journal in the field that Professor Kuo currently serves as editor-in-chief.
“The reason we are excited about this lecture is that it is not common for an engineering professor to become a prime minister,” he said. “And we have one before us. I always think if we have more statesmen who have had engineering and science training, the world would be much more peaceful!”
For the full text of the opening remarks by Professor Way Kuo, please click here .
For the full text of the talk by Dr Yukio Hatoyama, please click here .