The agreement underscores the quality of the applied research conducted at the University and demonstrates a comprehensive technology transfer process, taking applied research ideas developed by faculties and transferring them into marketable t 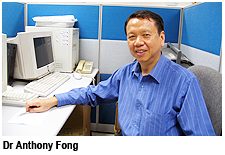 “My invention is a new form of computer architecture that optimizes object-oriented programming which is not possible with current computer architecture,” Dr Fong said “It adds protection to computer instructions making computers more reliable, faster, and more consistent,” he said.

A point that will interest many users is that computers using Dr Fong’s new design will be less vulnerable to hackers. “My invention makes it much more difficult to attack data stored in computers,” Dr Fong said.

Dr Fong, the holder of two patents both related to the new architecture, has been working on his idea for 14 years. “Computer architecture has not changed much over the last 40 years and basically follows the established von Neumann design,” Dr Fong said. “But software and programming languages have evolved over many generations. This means there is often a mismatch between hardware and software.” Dr Fong’s solution is a new computer architecture design which is tailored to run object-oriented programming languages such as Java.

According to Mr H Y Wong, Director of the Technology Transfer Office at CityU, Dr Fong’s invention can be best explained using the analogy of a car engine and fuel. “Imagine the software is the fuel and the computer architecture is the engine. New fuel burning in old engine does not bring out the best performance. But if an engine is specially designed to run on the new fuel, the performance will then be optimized,” he said.

Mr Wong said the ASTRI licensing agreement was highly significant and gave due recognition to Dr Fong and his research team. “ASTRI is the biggest R & D organization in , being the research agency for the Government and gets a large portion of ITF funding every year. This shows they value our technology and applied research,” he said.

Mr Wong added that the University encouraged staff to license technology developed through research. “Since the research outputs are available, why not make use of them to help society? This is precisely what our roles are. After all, technology licensing is inherently a risk-free operation since the technology is licensed on an “as is” basis. We collect all the technology information at the University and figure out the best way to transfer and market our technologies to society,” he said.