“Is there anything we can take pride in and inherit from the Chinese traditional culture?” 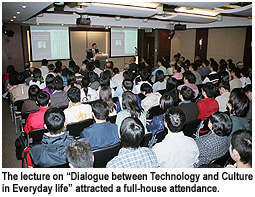 Professor Zhu Qingshi, President of the University of Science and Technology of China (USTC), began his talk titled “Dialogue between Technology and Culture in Everyday life” with this inspiring question on 19 November at a lecture organized by the Chinese Civilisation Centre to celebrate CityU’s 20th anniversary.

In his lecture, Professor Zhu shared his insights on the essence of science in Chinese traditional culture. He pointed out that human beings cognize the world in two ways: reductionism and holism. Reductionism, which was exemplified by the philosophy and science that evolved in ancient Greece, focuses on explaning nature and life from a micro-perspective. On the other hand, holism, which was represented by the philosophical thoughts of Laozi and Confucius of ancient China, emphasizes the adoption of a holistic and interactive approach to observe the world. 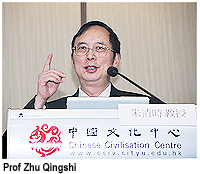 In the recent 500 to 600 years, reductionism has contributed to many significant scientific achievements. However, with the advancement of science, Professor Zhu said, "scientists began to realize the limitations of reductionism." The complexities and uncertainties of nature have rendered it difficult for scientific models to accurately present and explain all phenomena. For example, he said, scientists admit that weather forecasting is not accurate or reliable in the long run because it is difficult to capture the volatility of many initial phenomenona. He illustrated his point with the example of how a butterfly flapping its wings beside the Amazon River could lead to a storm in New York.

He said it was time to ponder these questions by taking a holistic approach. Over the past thousands of years, Chinese civilization has accumulated significant contributions to holism. Professor Zhu used examples from Chinese civilization, such as Weiqi, I Ching and traditional Chinese medicines, to explain the adoption of a holistic approach in appreciating the world and solving problems.

He cited research from USTC to show that different spheres of the human brain are in action when playing Weiqi and chess. The research found that the intelligence sphere of the brain is not particularly active when people play Weiqi, but there is a rearrangement of the other 37 spheres. The research results were published in the US journal Nature.

Professor Zhu suggested the use of modern advanced tools to study and attest to the adoption of a holistic approach in Chinese culture. Chinese culture focuses on achieving the optimum result by an integrated system, he pointed out, which is essentially the approach adopted by Weiqi, I Ching and traditional Chinese medicines, and which is increasingly important in modern science.

Professor Zhu majored in physical chemistry and graduated from USTC in 1968. He taught and conducted research in leading institutions in the US and France before becoming the President of USTC in 1998. He was elected as a member of the Chinese Academy of Sciences in 1991.