CityU’s Associate Dean of Faculty of Humanities and Social Sciences (FHS), Dr Joshua Mok, has been appointed by the University of Bristol (Bristol U), , the first Chair Professor in East Asian Studies. Starting his appointment in January 2005, Dr Mok will be Director of the newly established Centre for East Asian Studies (CEAS) at

Dr Mok feels highly honored by the appointment and looks forward to establishing a trilateral partnership among CityU, Bristol U and Tsinghua University in mainland . Talks among the various institutions have been highly encouraging and there are plans ahead for joint summer programmes and exchanges among academics and students. These might pave way for joint degree programmes.  He said, “One of my missions is to enhance understanding among European scholars contemporary issues in .”

The CEAS is the result of two years’ ground-laying work at It signifies the University’s commitment to the project of engaging with , the leading global player, in the 21st century. It will be an interdisciplinary centre with focus on postgraduate teaching and research on contemporary issues and comparative policies. Dr Mok also sees the possibility of contributing to the modernization efforts in mainland . “Many mainland officials are very interested in the policy development and management systems in the Western countries,” he noted. “I hope I will be able to facilitate training and their understanding in this area in my new appointment.” 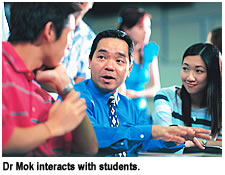 Professor Ray Forrest, a prime mover behind the CEAS project at Bristol U, said, “The centre will not only produce people who can help construct the new relationship with East Asia but will also generate research and scholarship that will support international understanding and policy development.” Commenting on Dr Mok’s appointment, Professor Forrest said, “This is a great appointment for us. Dr Mok has an outstanding track record as a scholar and also has the vision, energy and leadership skills required to take the new Centre into the premier league.”

Dr Mok, 39, was among the first batch of graduates of CityU’s Bachelor’s Degree in Public and Social Administration in 1989. He obtained his Master’s and PhD Degrees at of and London School of Economics and Political Science, , respectively. His interdisciplinary training spans across social work, sociology, public and social administration. He has engaged in comparative education policy analysis, comparative public policy in , contemporary studies and contemporary social development studies in . Within the past 11 years, he has published 12 books and many articles in international journals. The long list of publications in his name will soon include a major book on Education Reform and Education Policy in .

Dr Mok joined CityU in 1993 as an Assistant Professor of the Department of Public and Social Administration and was promoted to the current post of FHS Associate Dean in 2002. He said that the wide academic network he has established in and his interdisciplinary background were important considerations leading to his new appointment. He thanked CityU for giving him the many opportunities to nurturing his administrative skill, and building his recognition as an academic of international standing. 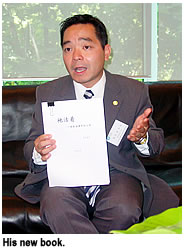 A devout Christian, Dr Mok attributed his success and achievement largely to the grace of God. He described his childhood as tough and needy of love. “My mother left me when I was just one year old. I always felt like a male Cinderalla when I was a boy,” he recalled. It was with Christianity that he found faith, hope and love, the powerful motivating force pushing him to work hard and strive for success.

But he found that many people in have lost faith and hope and become cynical in the past few years, which prompted him to write a book on his faith to instill positive thinking—He is there. “Now that I have come to the middle of my life, it is about time to look back and think ahead what to do for the rest of my life.” He said, “I have summed up my thoughts in this book, which I hope can be an inspiration for other people.”