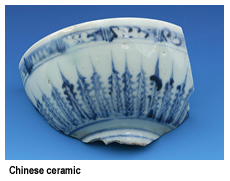 Some 20 archeologists, scholars, researchers and curators from the mainland, , and gathered at CityU, 24 and 25 June, to present and exchange their findings on China’s 12th to 15th century ceramics and maritime trade. Jointly organized by CityU’s Chinese Civilisation Centre (CCIV) and the HKSAR Antiquities and Monuments Office, the Conference generated a multi-disciplinary approach to studying this aspect of relatively unexplored history.

Preceding the Conference was an exhibition of some 200 relics displayed in the CityU Gallery in January this year, offering viewers a rare glimpse into  porcelain as a maritime export and a cultural conduit between and the West. The relics were gathered from archeological sites and institutes scattered throughout , mainland , and , reminiscent of the historical westward route of Chinese porcelain trade. 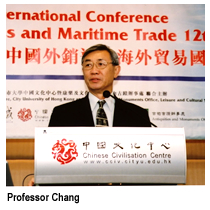 Professor Cheng Pei-kai, CCIV Director and Principal Investigator of the China Westward Project, introduced the background of the study. Porcelain, he said, is a durable and crucial resource for reconstructing ’s involvement in medieval East-West maritime 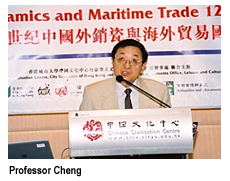 trade. The 12th to 15th century marked the pinnacle of province, as ’s most prosperous trading port. Porcelain relics excavated in Quanzhou and nearby ceramic production sites thus became a major focus of Cheng's Project.

Another researcher, Professor Peter Yu of the AP, illustrated Thermoluminescence (TLD) and X-ray Fluorescence (XRF) used for porcelain dating and testing. “Using heat, light and x-rays establishes a more scientific basis of judgment than the traditional approach based on shape, color and glaze,” he said. Using TLD, AP’s Ancient Ceramics Scientific Authentication Centre led by Dr Leung Po-lau,  Adjunct Professor, also one of the Project researchers, has authenticated more than 700 ceramic shards for local dealers, collectors and archaeologists since its establishment in 1991.

The opening ceremony also featured a case study of Chinese ceramics excavated from Angkor Thom, , presented by Ms Maggie Wan, CCIV Tutor. Based on a collection of Chinese ceramic shards unearthed by the archeological unit of the Japanese Government Team for Safeguarding Angkor, the research team suggested that maritime trade between and the Khmer Empire had prospered from the 12th to the 15th century. 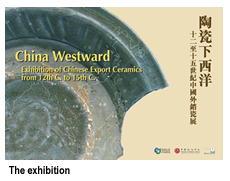 Also invited to kick off the two-day conference was Mr Edward Ho, Chairman of the Antiquities Advisory Board. “Globalization has become a way of life,” he said. “The world has always been connected through international trade and maritime trade was an important forerunner.” He reminded the audience not to overlook the importance of in the history of ’s porcelain trade.