The list of academics participating in the International Conference on Mathematics and Its Applications held at City University 28-31 May reads like the "Who’s Who" of mathematics.

Among the notable plenary speakers were: Fields Medallists Professor Steve Smale of the Toyota Technological Institute in Chicago, US, and Professor Pierre-Louis Lions of the Collège de France in Paris, France; Professor Louis Nirenberg of the Courant Institute of Mathematical Sciences of New York University, US, winner of the Crafoord Prize in Mathematics; Professor John M Ball of the Mathematical Institute of the University of Oxford, UK and Professor Stuart S Antman of the Institute for Physical Science and Technology of the University of Maryland, US, recipients of the Theodore von Kármán Prize; Sir Michael Berry, Professor, Department of Physics of Bristol University, UK, recipient of the Wolf Prize for Physics; Professor Andrew C Yao, Department of Computer Science of Princeton University, US, recipient of the Alan M Turing Award; the President of the International Mathematical Union; the former President of the Chinese Mathematical Society; the Director of the Institut des Hautes Etudes Scientifiques, Bures-sur-Yvette; and members of other internationally renowned academies.  As an indication of their strong support of the event, Mr Serge Mostura, Consul General, and Dr Abdo Malac, Consul for Academic and Scientific Affairs, of the Consulate General of France in , attended the Conference Banquet. 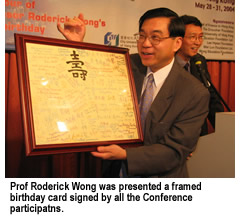 The Conference was dedicated to Professor Roderick S C Wong, Dean of the Faculty of Science and Engineering, Chair Professor of the Department of Mathematics and Director of the Liu Bie Ju Center for Mathematical Sciences at , on the occasion of his 60th birthday. To commemorate the occasion, Professor Wong was presented with a framed birthday card signed by all the Conference participants. The card featured the Chinese character 「壽」 which represents longevity.  Professor Wong is a Fellow of the Royal Society of Canada, Foreign Member of the of , recipient of the Killam Fellowship from the Canada Council and of the Rh Award for Outstanding Contributions to Scholarship and Research from the , and former President of the Hong Kong Mathematical Society. 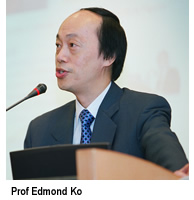 In his opening address, Professor Edmond Ko, Vice-President (Undergraduate Education) of said Professor Wong had made highly significant contributions to the University since joining CityU in 1994, through commitment to high-quality education and tireless efforts to recruit world-class mathematicians as Faculty members. “The presence of so many distinguished mathematicians at the Conference is a testimony to Professor Wong’s academic standing, achievements and contribution to the mathematical community,” Professor Ko added. 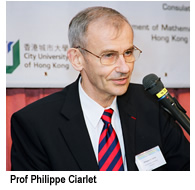 “City University has attracted an impressive list of eminent mathematicians and scientists from around the world to this Conference”, said Professor Philippe G Ciarlet, Chair Professor of the Department of Mathematics at City University and Co-Chair of the Conference. His Co-Chair, Professor Qiang Zhang, Head of the Department of Mathematics at , remarked that the Conference provided an ideal forum for mathematicians to discuss the latest trends in mathematical research and recent developments. 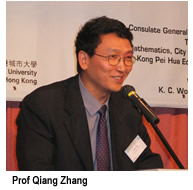 The Conference attracted over 110 participants from Europe, North America and Asia.  Topics included many applications of mathematics, such as nonlinear elasticity, atomic physics, statistics and probability, computer science, biology, free surface phenomena, and quantum theory. “We wish to fully explore how mathematics can be applied to real-life applications,” explained Professor Zhang. “For cities such as Hong Kong, where demand for cutting-edge information and industrial technology is growing at a rapid pace, advanced applied mathematical research has greater applicability than ever."

Papers delivered at the Conference represented the most advanced research conducted within the mathematics community.  The papers will be published in a special issue of the Journal of Computational and Applied Mathematics early next year. “Mathematics is the most fundamental and abstract of all sciences,” Professor Ciarlet commented. “Even for us, it is often difficult to fully understand some of the aspects involved in the latest mathematical research.” 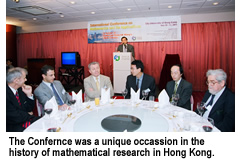 Professor Wong said the Conference was a unique occasion in the history of mathematical research in Hong Kong.  “This is probably one of the highest level international conferences on advanced mathematics held in Hong Kong in recent years,” Professor Wong commented. “It not only promotes activities in mathematics locally, but also inspires young mathematicians."